On the Whiskey Trail!

Do you know the difference between Scottish malt whisky and American whiskey? Do you know what makes a bourbon a bourbon? Read on and all will be revealed!

Having lived in Scotland for many years and having toured many of the Scottish whisky distilleries (see On the Whisky Trail), when we were in Kentucky and Tennessee recently, it seemed reasonable that we should check out the US versions of the amber nectar. 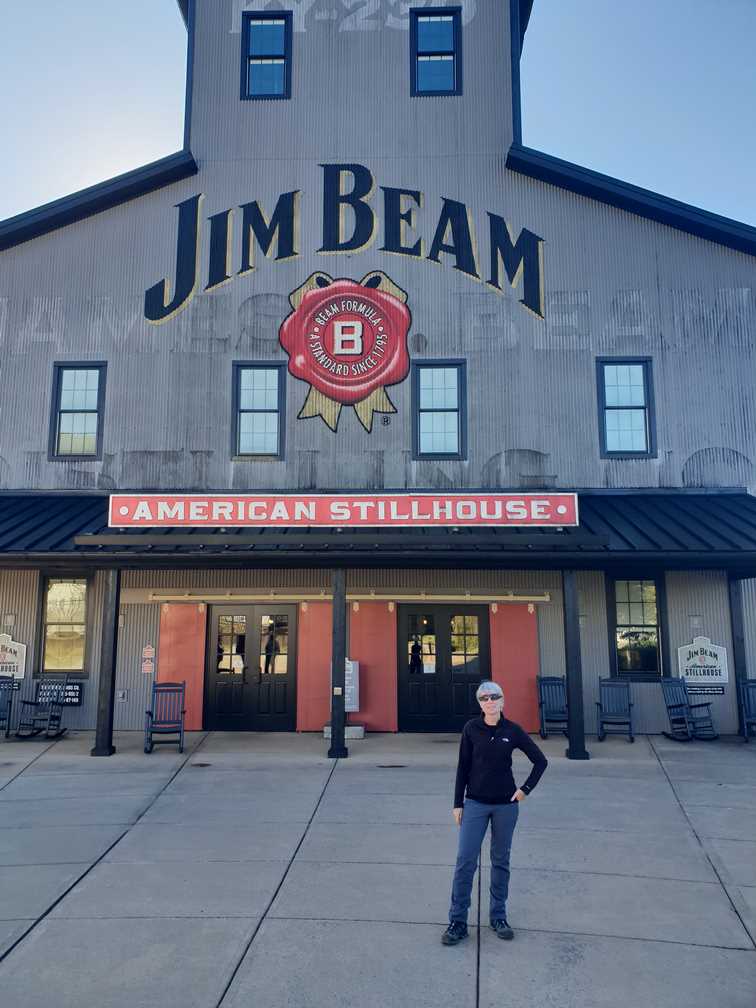 The Jim Beam Distillery is in Clermont, Kentucky, not far from Louisville. Members of the same family have been involved in making bourbon at this distillery for seven generations, although it is now owned by a Japanese company. We approached the distillery via a long, winding driveway through well manicured gardens, reminiscent of visiting many of the Scottish distilleries which are also situated in beautiful parkland. One immediate difference, however, is the tall, industrial-scale barrel warehouses that feature in the landscape – rather different from the single storey warehouses that are the norm in Scottish distilleries. (I think the industrial scale ones are hidden away elsewhere!) 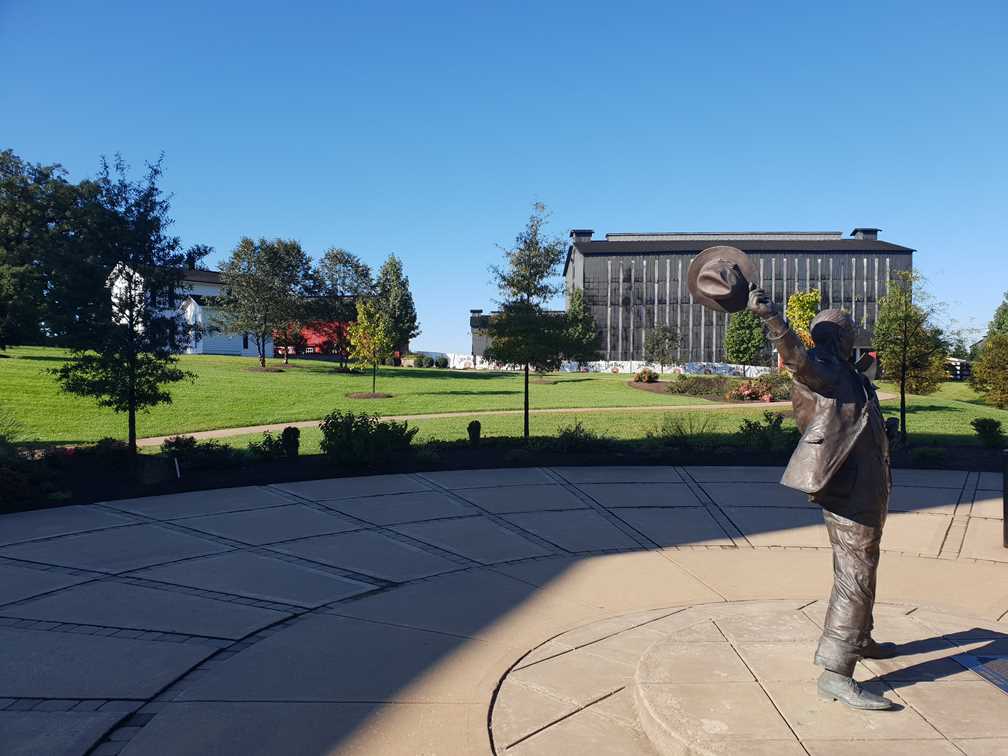 Barrel warehouse in the background. Jim Beam statue in the foreground.

The Jim Beam visitor centre is well presented and the tour, at $14 is excellent value. It lasted about 90 minutes and took in all the different process areas with a very knowledgeable guide. It included a tasting of 3 whiskeys at the end and visitors were allowed to select which whiskeys they wanted to sample. The entry fee also allowed for the glass to be taken away as a souvenir.

The tour actually commenced with a fully-operational smaller version of the entire whiskey-making process so that the guide could explain the different stages clearly and audibly before we moved on to the large scale operation, which produces millions of gallons of whiskey each year. 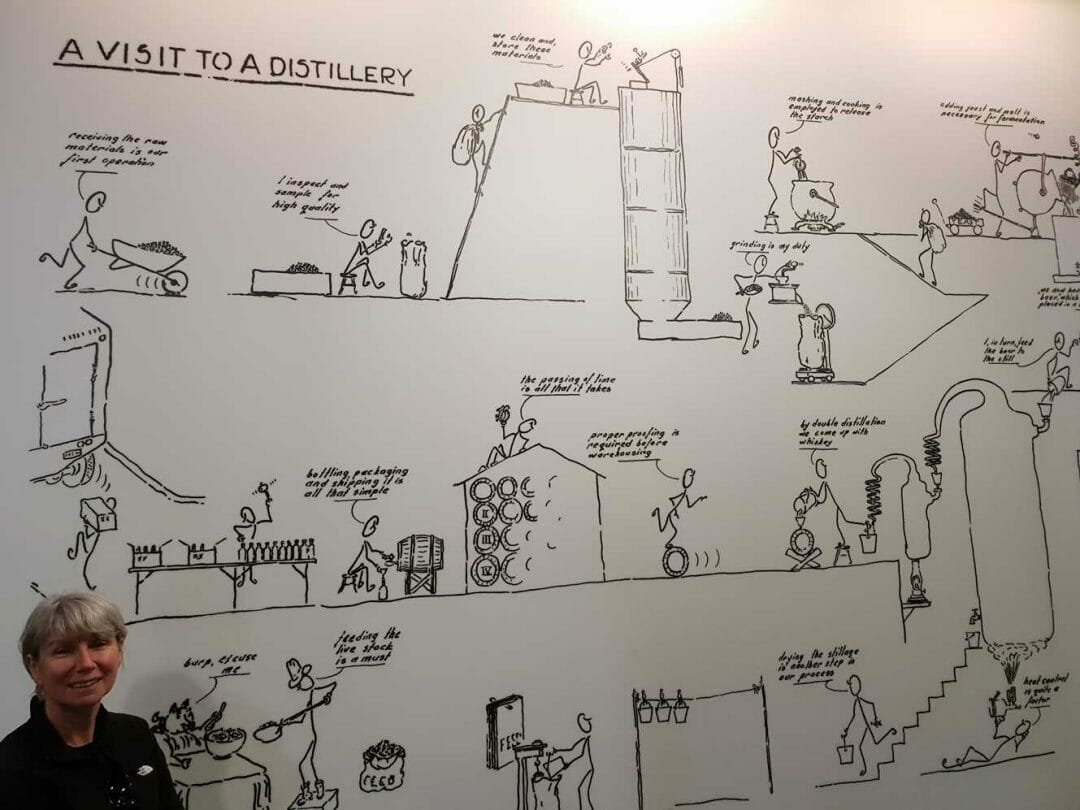 Part of the working model

The tour was very hands on. We got to sniff inside the fermentation tuns (be careful here! It is wickedly  pungent and although the guide warned us, it just about knocked me over) and to taste the new spirit from our fingers, poured out from the barrel by the guide. 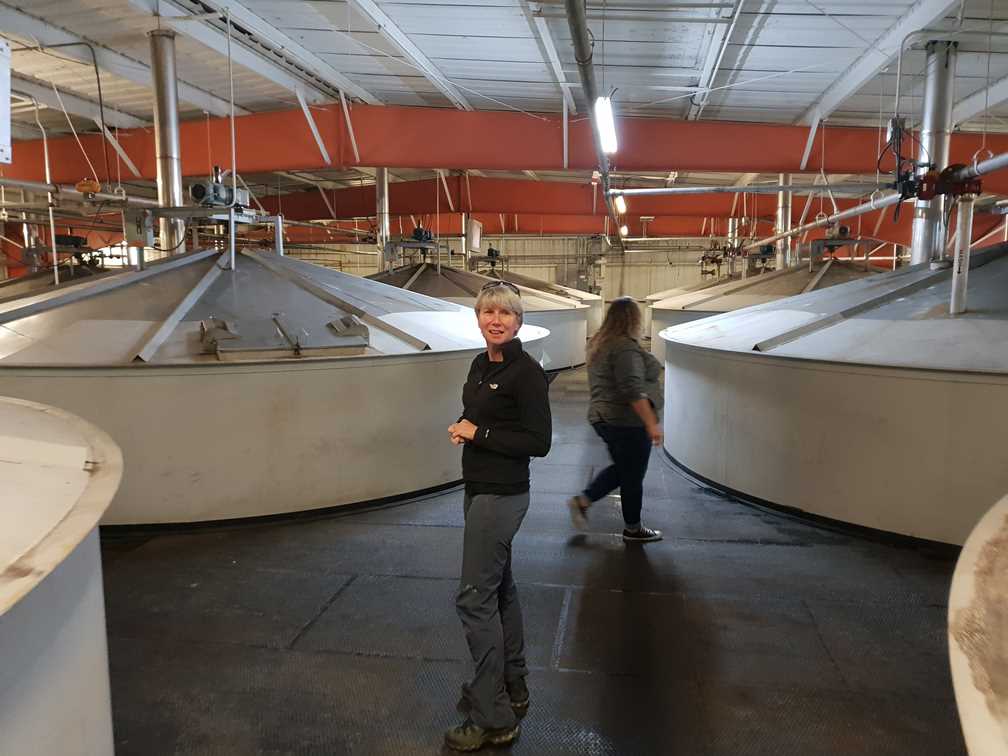 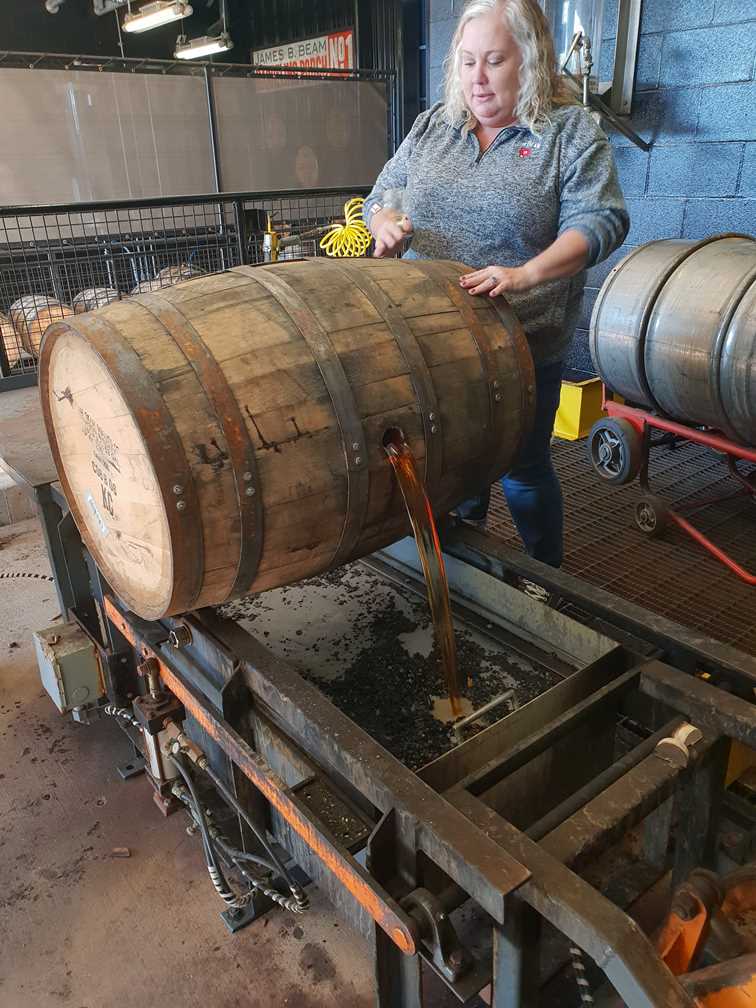 New spirit into which we dipped our fingers!

An added attraction is that there is an option to bottle your own whiskey! They charge exactly the same in the shop for the bottle of bourbon, but you have selected the bottle, washed it in bourbon, watched it through the filling process and then sealed it in wax with your own thumb print. Cool! For an additional fee, you can have the bottle engraved. Peter did this. The bottle reads: ”Peter’s whiskey – Hands off.” 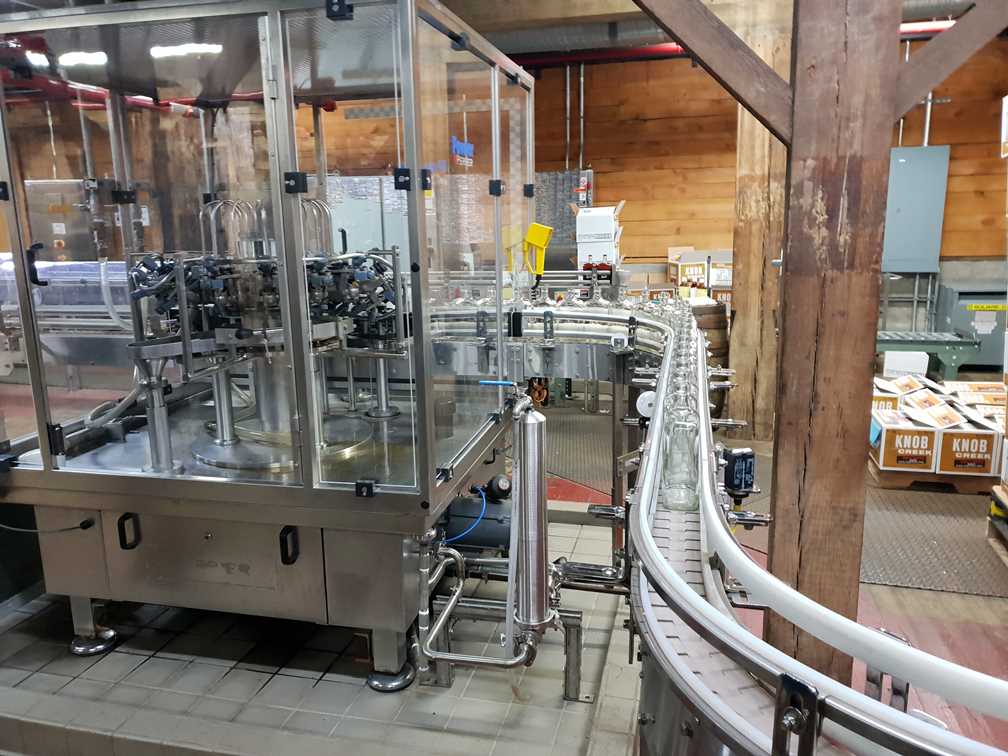 Jim Beam has this smaller, artisan bottling operation as well as a much larger industrial section next door 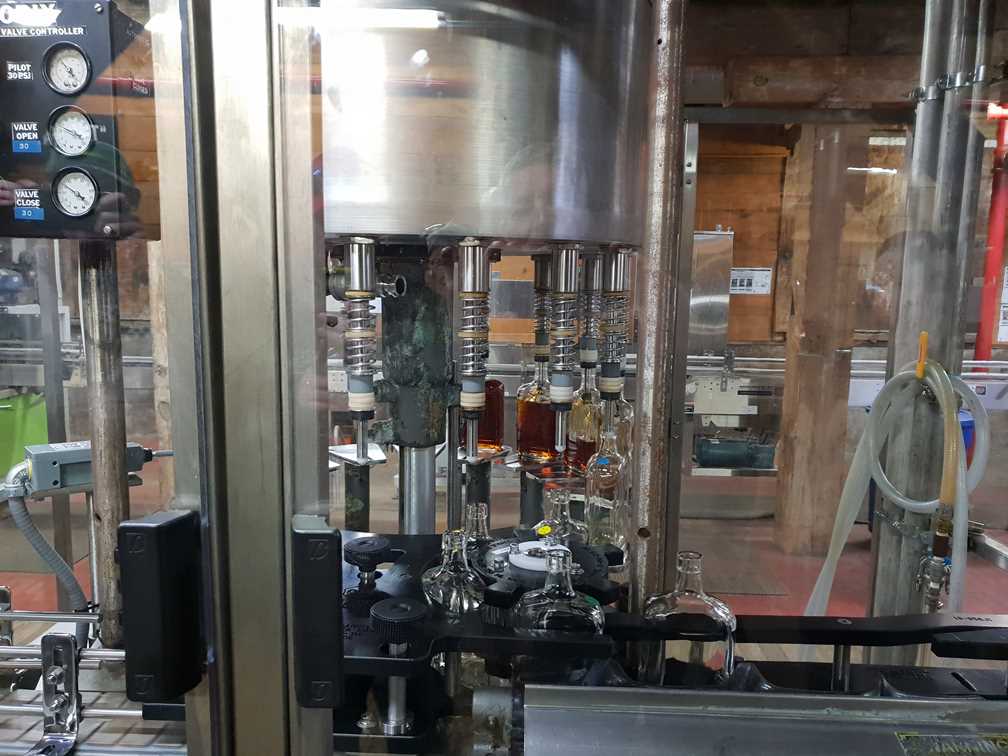 Filling the bottles. One of those is Peter’s!

This was a really interesting and detailed tour in which we learned a great deal about the whiskey making process. The guide was excellent and explained the differences between whisky and whiskey  very clearly, as well as defining what makes a bourbon a bourbon and not just a whiskey.  I have summarised this in the conclusion below. 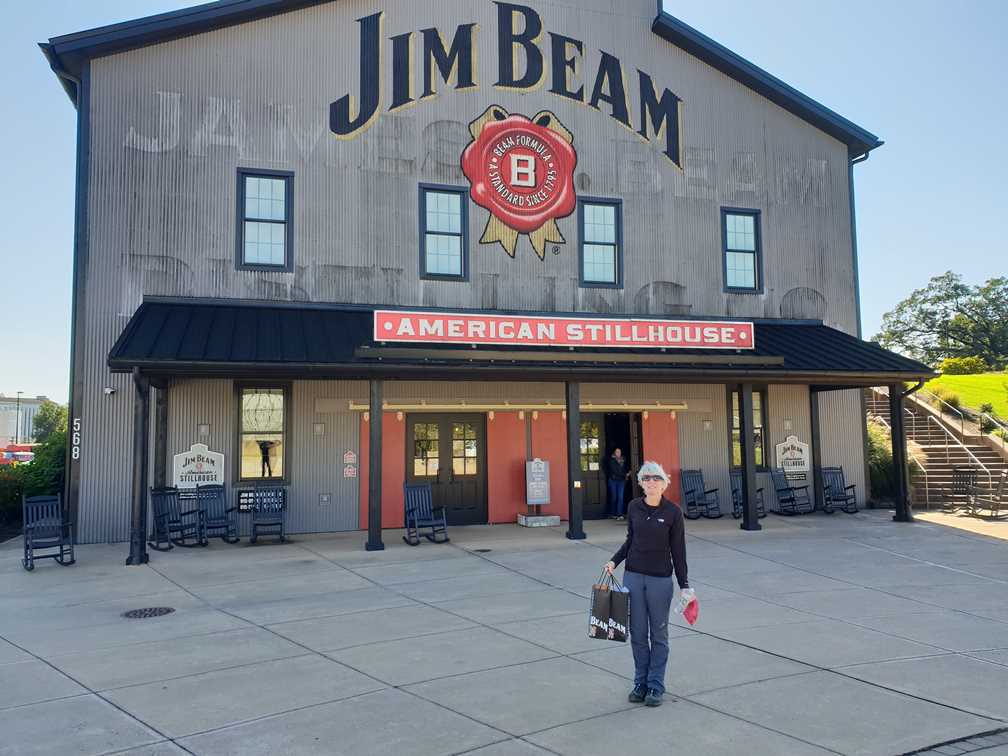 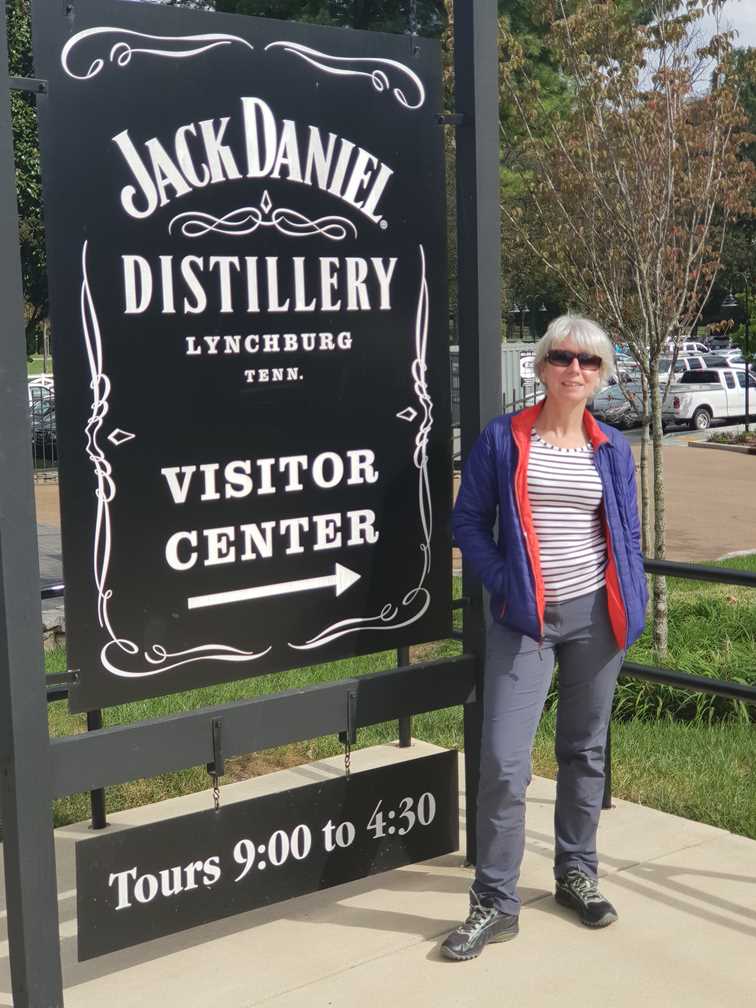 A few days after visiting the Jim Beam Distillery, our road trip took us to Lynchburg  in Tennessee and Jack Daniel’s Distillery. There were a variety of tours to choose from. We went on the Angel’s Share tour. It cost $25, lasted about 90 mins, included a tasting of 5 different whiskeys and a souvenir glass. This was another very well organised and well presented tour. The tour guide, a local guy and a bit of a comedian, was informative, knowledgeable and entertaining.

The first part of the tour was outdoors. We visited the area where the charcoal is made for the “mellowing” process and then the place where the water for the whiskey comes down from the spring. 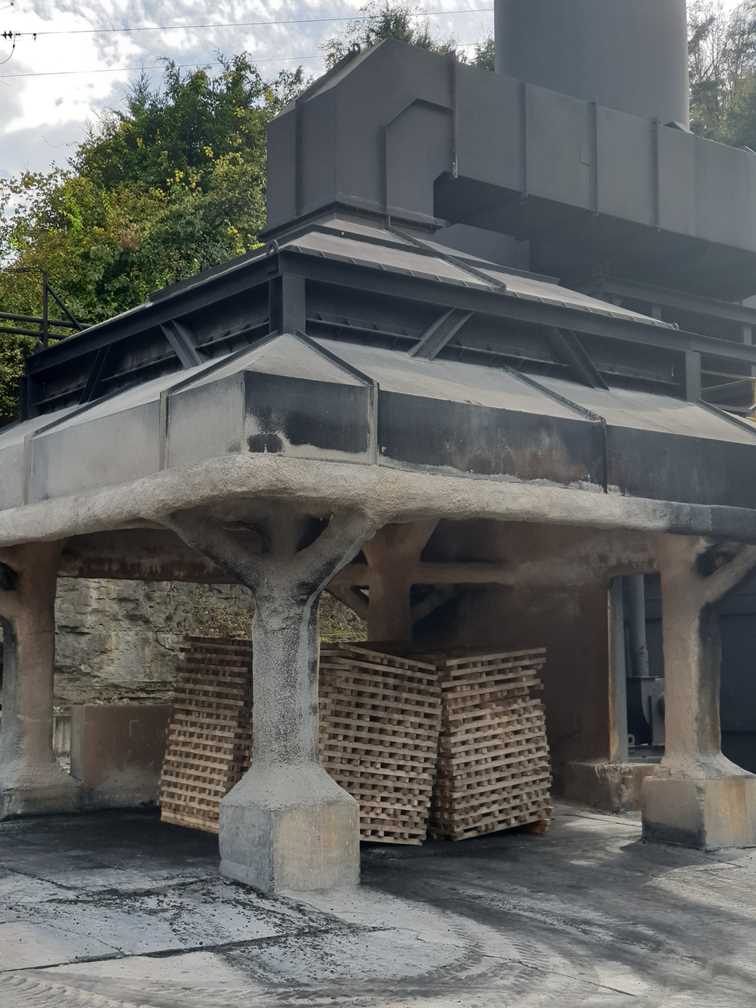 Sugar maple ready to be turned into charcoal

This spring is the reason Jack Daniel set up his still here. We also went into the building which Jack Daniel used as his office and where he eventually suffered the injury which resulted in his death: arriving at work early, he was unable to access the safe which his nephew usually opened. In frustration, he kicked it, broke his toe and refusing to seek medical assistance, contracted gangrene. Several amputations failed to save his life. The moral of the story (according to our guide) is “Don’t go to work early: it will kill you!” 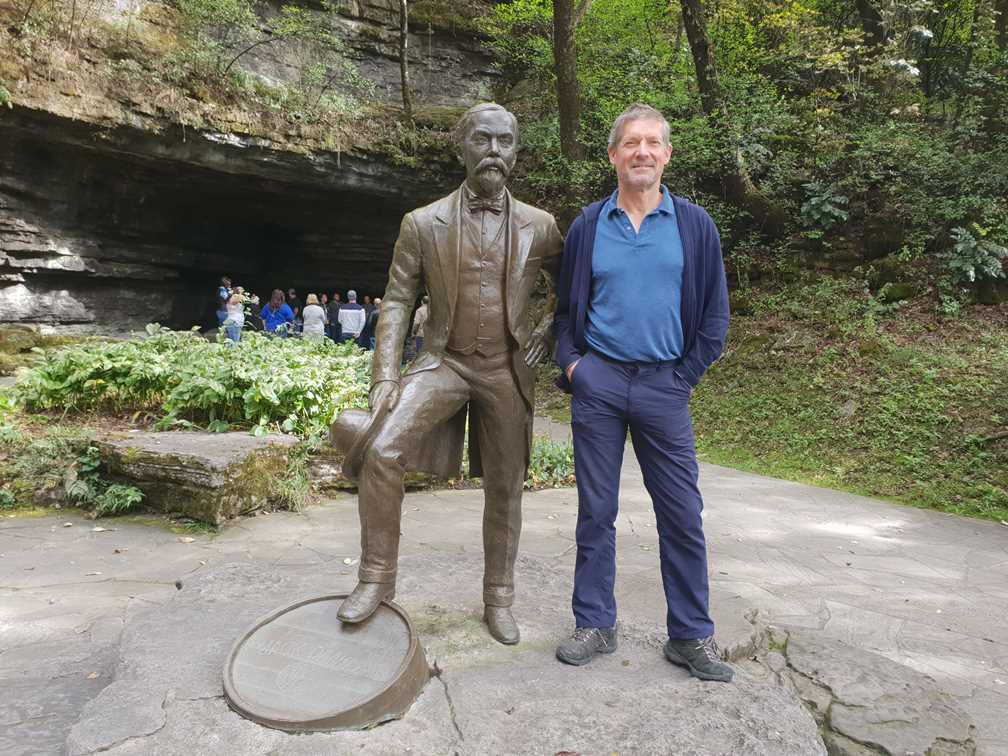 Jack Daniel outside his office. He was actually quite a diminutive figure in real life, but cultivated a certain image in his dress – and, of course, that moustache!

The Jack Daniel Distillery also has its very own fire brigade: 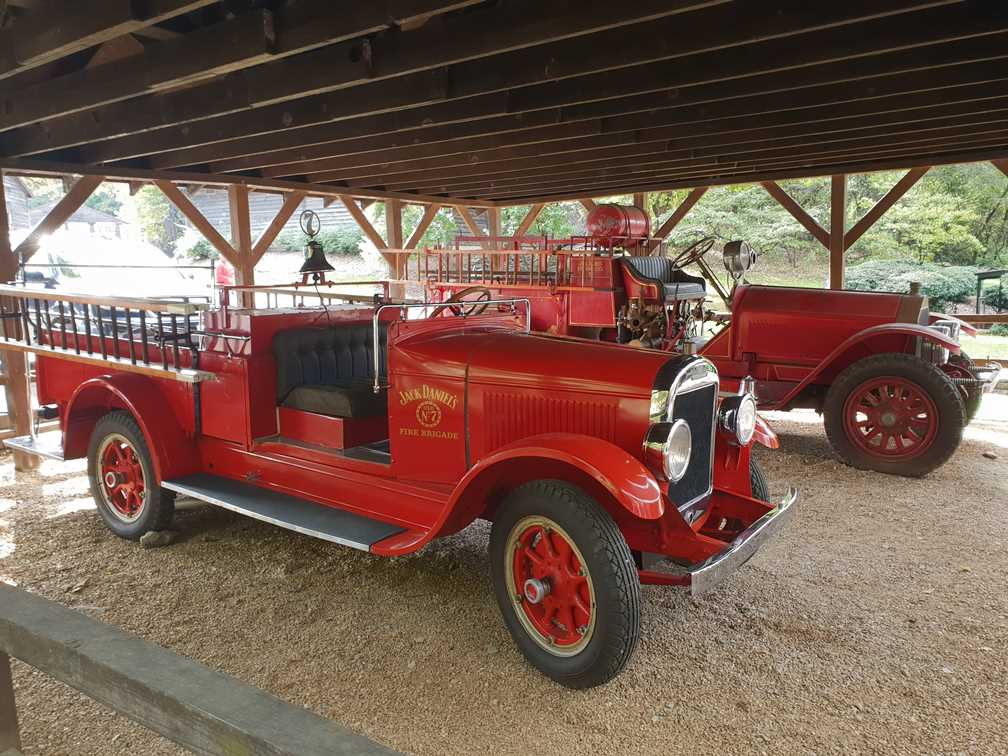 We went then went into the production area and although it was access all areas, photos were not allowed here because of the fire risk. The process of making Jack Daniel’s whiskey is basically the same as it is the world over: the grains are heated up and the enzymes in the malted barley break down the starch to release the sugars; the yeast is added; fermentation takes place; the resulting liquid is distilled in copper stills. Jack Daniel’s whiskey is only distilled once but the main difference is that there is an additional process of “mellowing”, formerly called “leeching” (you can understand why they changed the name!). Mellowing involves running the distilled whiskey through several feet of charcoal made from sugar maple to take out any impurities and to pick up more flavour. This is the main reason why Jack Daniel’s whiskey is a whiskey, not a bourbon. Following this, the whiskey is matured in charred American oak barrels (only used once as is the norm in America) for a minimum of four years. 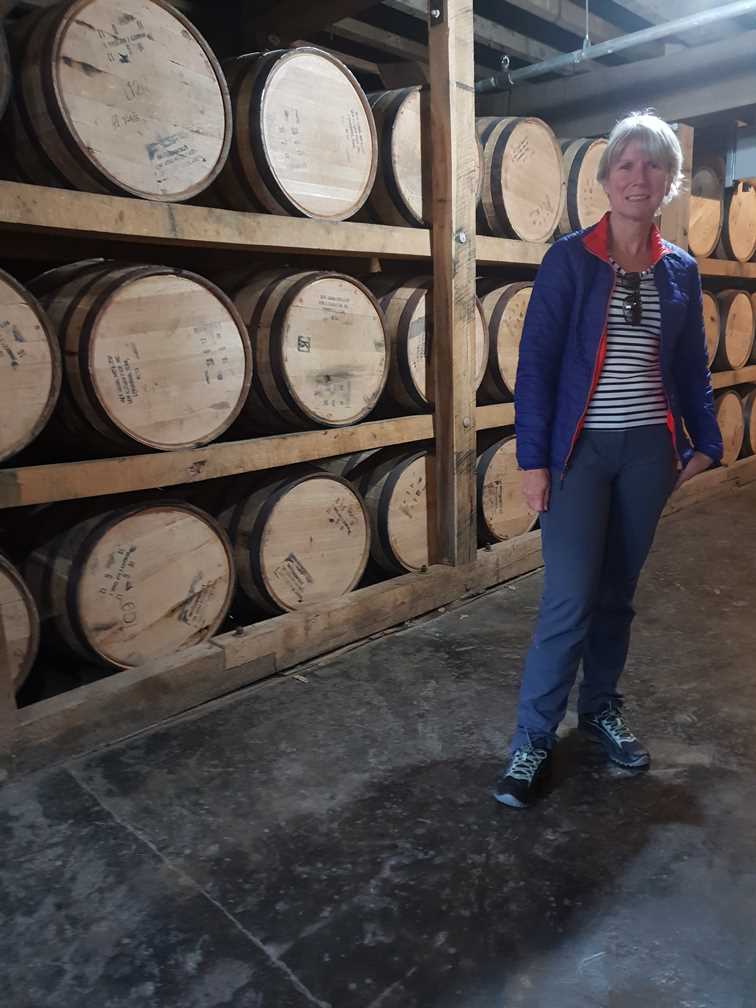 In the barrel warehouse

Jack Daniel’s Distillery is also very proud of the fact that they make all their own barrels, the only distillery to do so. There was a short video showing the coopers at work and outlining the process of barrel making. We saw this process live when we visited the Speyside Cooperage in Scotland (see On the Whisky Trail).

Following the tour, we headed to the tasting room which is  in one of the barrel houses. It is beautiful. We were led through the tasting. I think this is always helpful, unless you are an expert, which I am not. 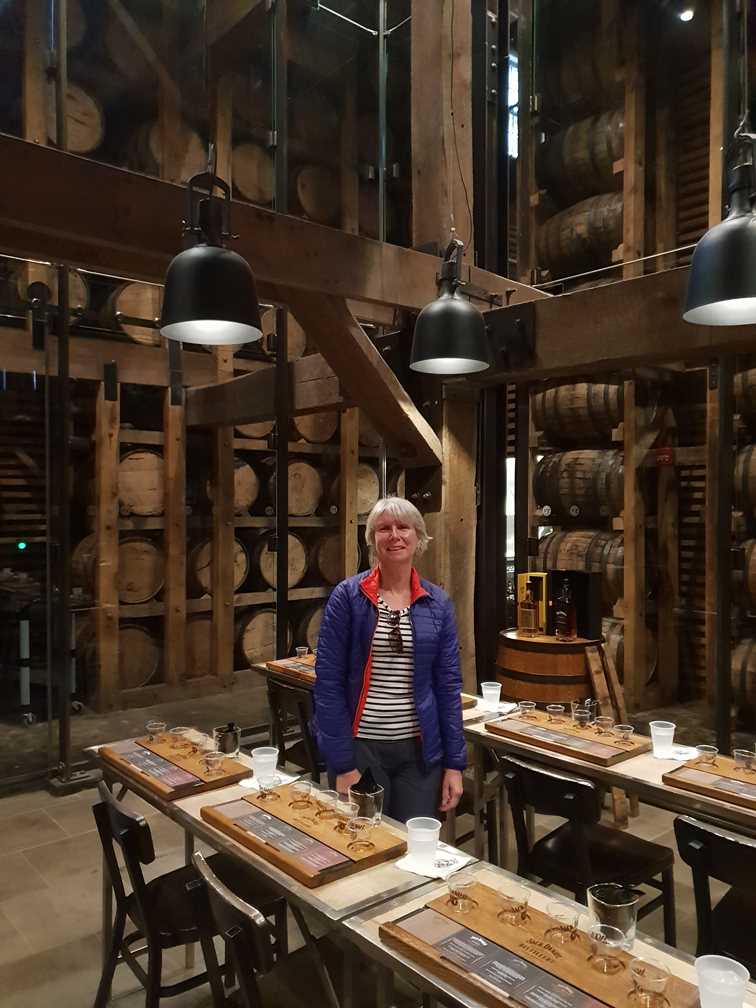 First to arrive in the tasting room 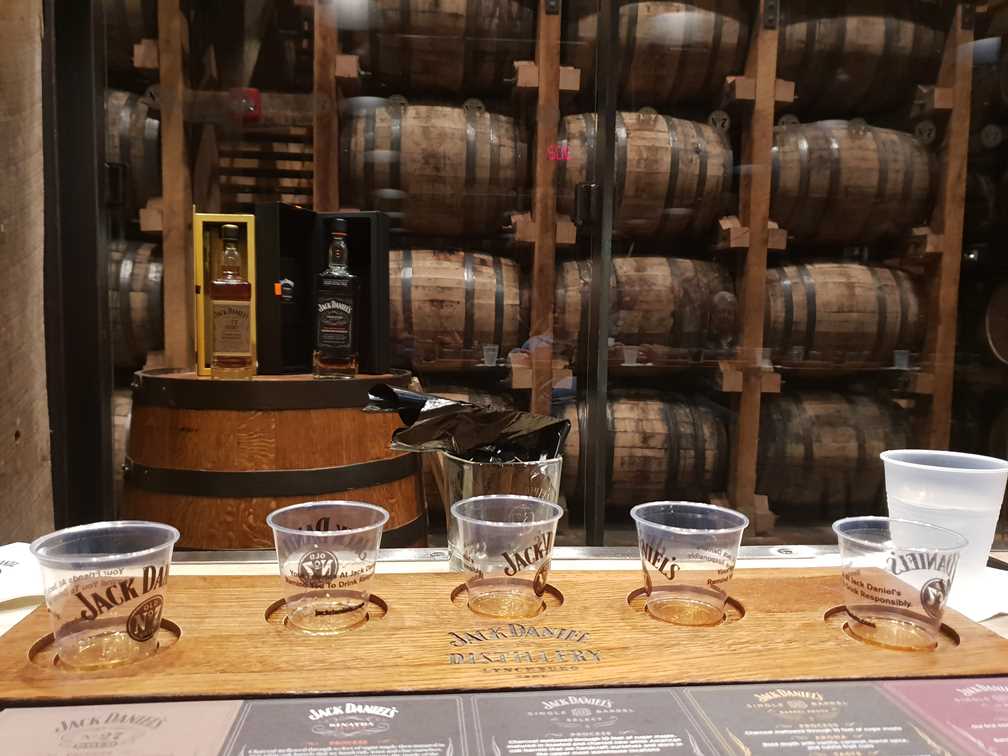 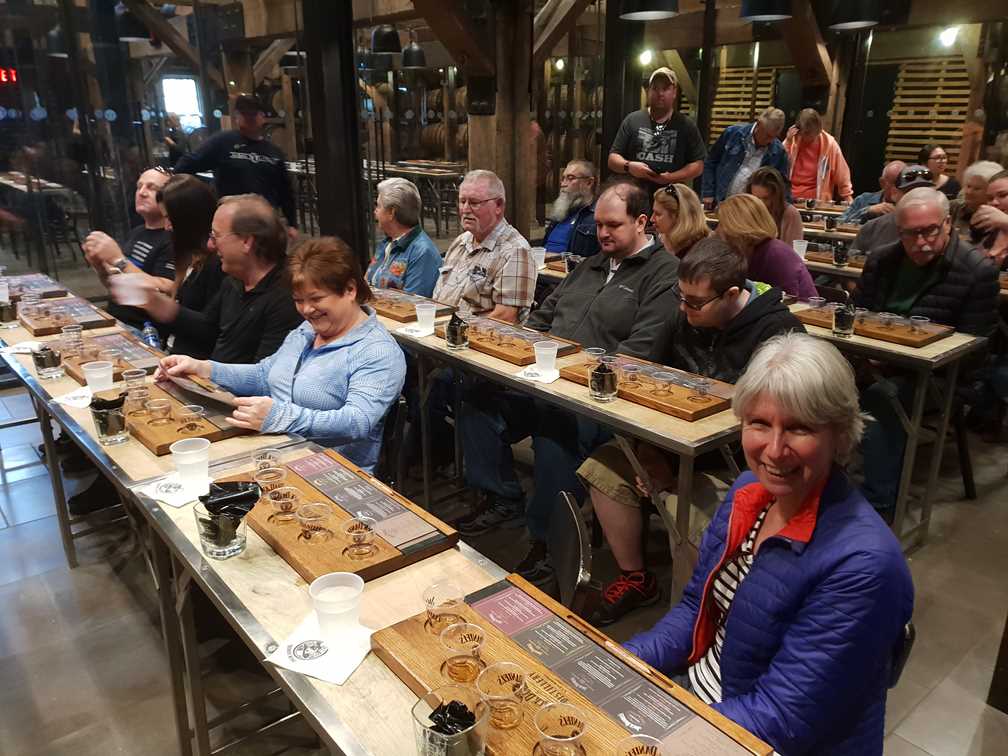 All in all, this was a very interesting tour and included several different features which we had not seen before.

So what are the differences between Scottish Malt Whisky and American Whiskey? And what makes a bourbon a bourbon?

What became clear in these visits is that the process for making Scottish malt and American bourbon is essentially the same: the grain is heated up in mash tubs; yeast is added and fermentation takes place; the resulting alcohol is double distilled; the new spirit is matured in barrels from which it takes flavour and colour.

But there are differences. The grains which go into making the mash are different in every distillery and the process always differs slightly, but for American bourbon to be bourbon, a minimum of 51% must be corn; for bourbon to be bourbon, it must be produced completely in the US and it must be put into barrels when it is no more than 125 proof; nothing can be added to the spirit for it to be a true bourbon; bourbon must also be matured in a brand new barrel, which has been charred ( – Scottish malt is almost always matured in a barrel which has been used before  – for bourbon, sherry, port, red wine….. and from which it takes additional flavour and colour). The difference in climate between Scotland and the southern states of the US also accounts for certain differences in the whiskey maturing process. As it is much warmer in Kentucky and Tennessee in the summer, the “angel’s share” is rather more here than in Scotland. American whiskey (and bourbon) is rarely matured beyond 8 years as the angel’s share would be rather expensive. In Scotland, whiskies are often matured for 25 years.

These are the main differences as I understand them, but it is also worth noting that the process is visually different: Scottish malt whisky is distilled in beautiful copper “pot stills” in batches, whereas American whiskey is distilled in “column stills”, which run continuously and look rather more industrial.

One final point: all bourbons are whiskeys, but not all whiskeys are bourbons. The minute anything is added to the spirit, it ceases to be a bourbon.

The visits to Jack Daniel’s Distillery and the Jim Beam Distillery were both really interesting and informative. We learned a lot and would definitely recommend.

On the Whisky Trail 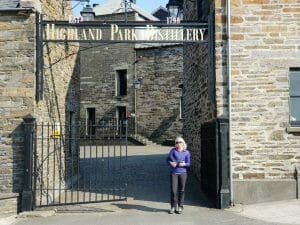 Join us as we tour whisky distilleries across Speyside, Aberdeenshire and Orkney.

On the Whisky Trail – again! 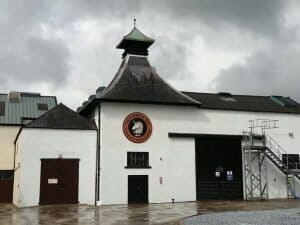 Sharing is caring! Please Pin it or share to social media. 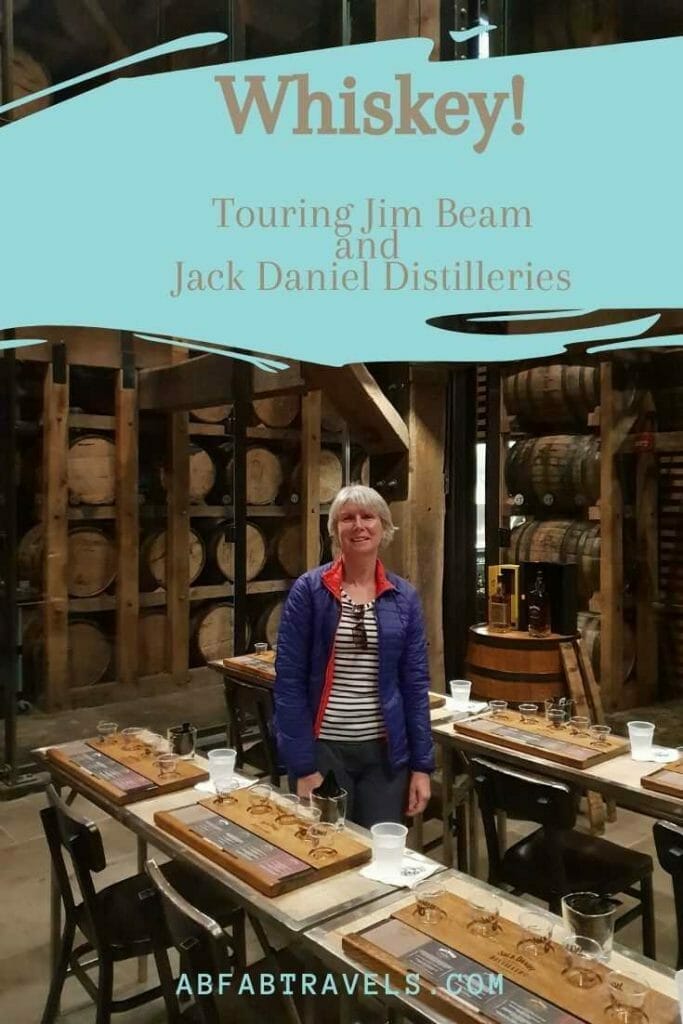