Go East! Our road trip takes us through Saskatchewan, Manitoba and Ontario to Niagara Falls

Our road trip continued and the terrain changed enormously as we headed east across Canada. We left behind the mountains and glaciers of Alberta and crossed the plains and prairies of Saskatchewan and Manitoba. We drove through the forests of Ontario and around The Great Lakes, ultimately, arriving at the breathtakingly beautiful Niagara Falls.

Long straight roads stretched out ahead of us as we crossed Saskatchewan and Manitoba. 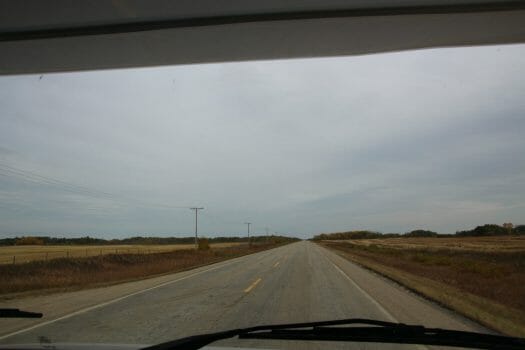 The weather during this stretch was not the best, but we did encounter some interesting places along the route. New Iceland near Winnipeg in Manitoba was once such place. 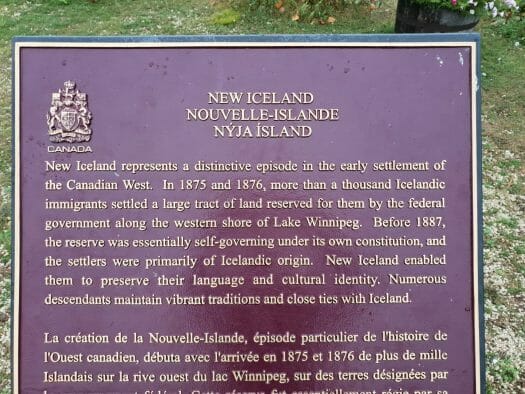 The Viking culture is still very much alive and celebrated. With places such as Reykjavik, Arborg and Gimli  (Norse for “Home of the gods”) this is clear. 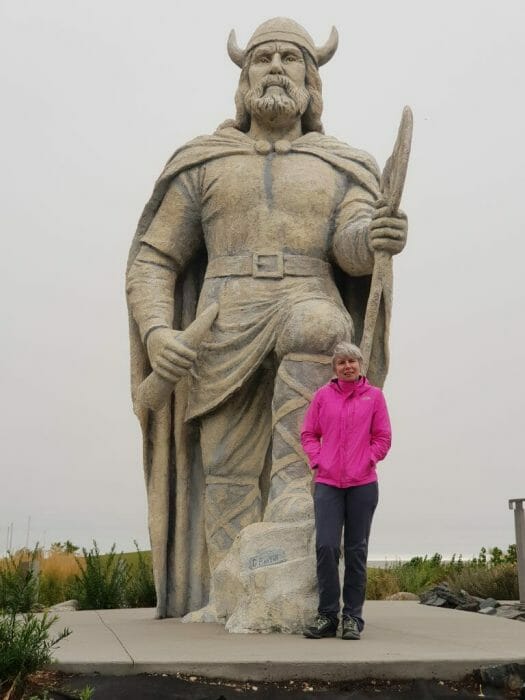 We stayed at a campsite on the shore of Lake Winnipeg, a place called Winnipeg Beach. In summer this is quite a tourist resort, but when we visited it felt like a seaside town out of season and autumn had definitely arrived. 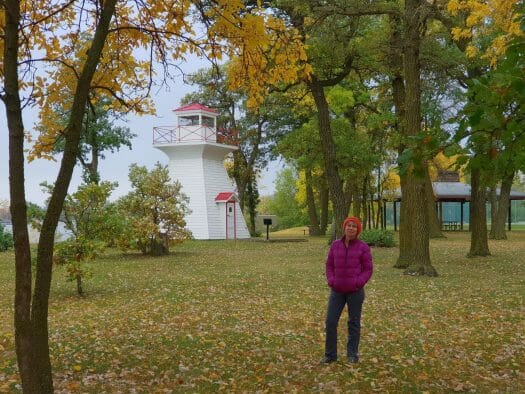 Ontario and the Great Lakes

And then the landscape gave way to trees, lots of trees, and more lakes. In fact, we were in Ontario and amidst The Great Lakes. We headed for Thunder Bay, a curious community miles from anywhere on the shores of Lake Superior. Lake Superior is the largest freshwater lake in the world and is like an inland sea.  It is impossible to see to the other side and the waves roll in and crash on to the shore. (I tasted the water to check it was not salty, btw!). It has many islands that trick you into thinking you can see the other side of the lake, but you can’t. 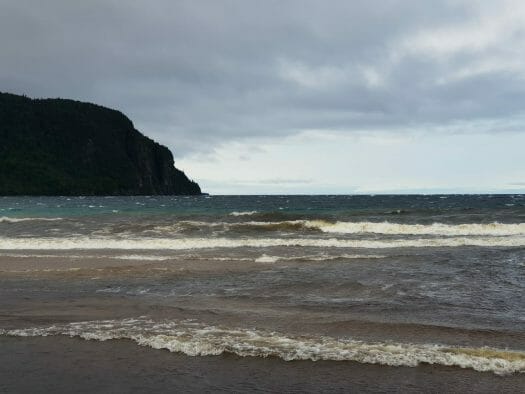 Whilst we were in Thunder Bay we visited Kakabeka Falls. These are really quite impressive. 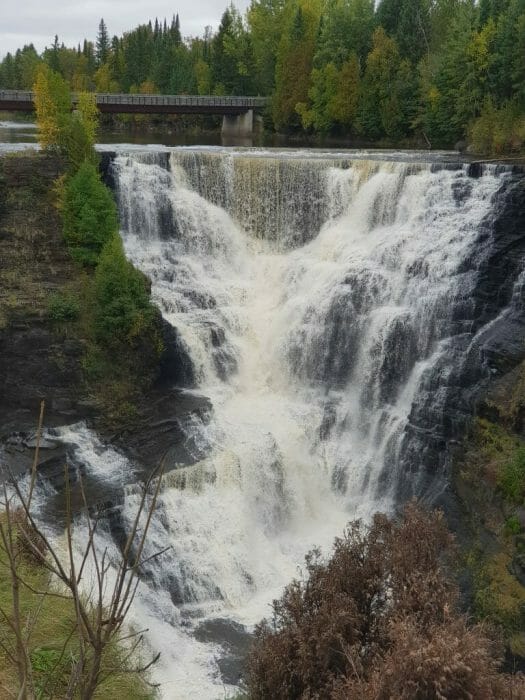 Just as there is a significant Icelandic community around Gimli, in Thunder Bay there is a strong link with Finland and many people migrated to this area from Finland towards the end of the nineteenth century. We had lunch in The Hoito, a quirky restaurant that serves Finnish/Canadian food. The restaurant has recently celebrated its centenary and claims to be the oldest co-operatively owned and run restaurant in Canada. It is situated in what was once the Finnish Labour Temple, a building established to support the Finnish community. The food was very tasty. 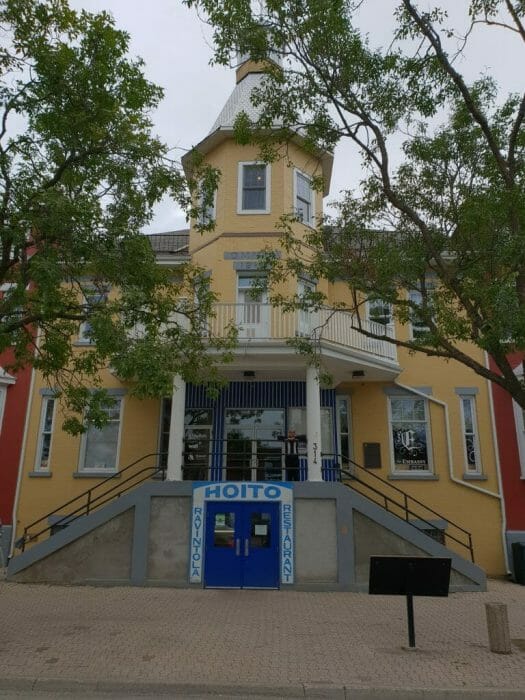 Our journey continued as we headed around Lake Superior, stopping to admire the views at of the lake at various points. And then Lake Superior gave way to Lake Huron, the second largest of The Great Lakes and equally impressive. There are apparently 30,000 islands in the Georgian Bay of Lake Huron alone! I should also mention that there are many, many other lakes as well as the so-called “Great Lakes” in this area. We had a lovely camp at the side of one, Lake Lauzon, one windy night. 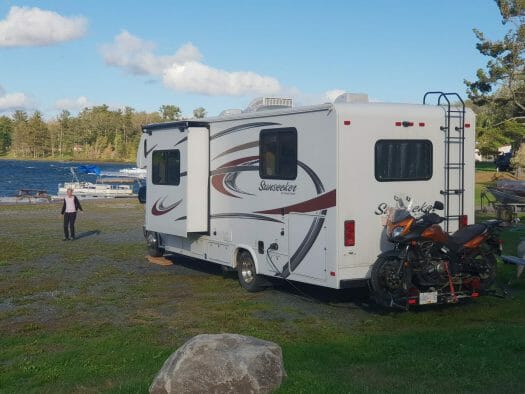 Niagara Falls had been high on my list of “must sees” for some time and this is was our next destination. We skirted around Toronto and down to Niagara. We were fortunate: the sun was shining and the sky was blue. The falls did not disappoint. Niagara Falls is truly breath-taking.

We cycled down to the falls and took in the American Falls first. They are beautiful and amazing and wonderful. Looking across to the American Falls 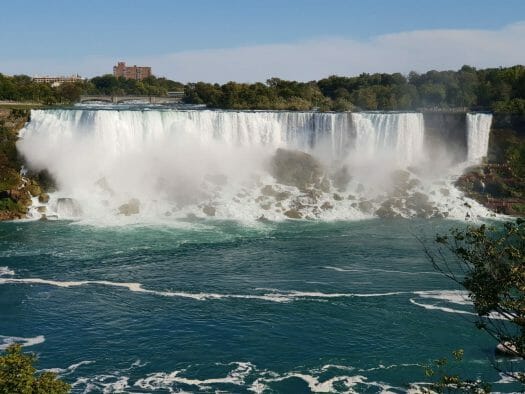 Then we worked our way closer to the Horseshoe Falls, which lies on the US Canadian border. This waterfall is simply awe-inspiring. A never-ending rush of water spills over the edge of the horseshoe-shaped cliff and cascades vertically into the river below. It is the most awesome sight. And on this occasion, because of the lovely sunshine, we were also treated to a rainbow in the spray. 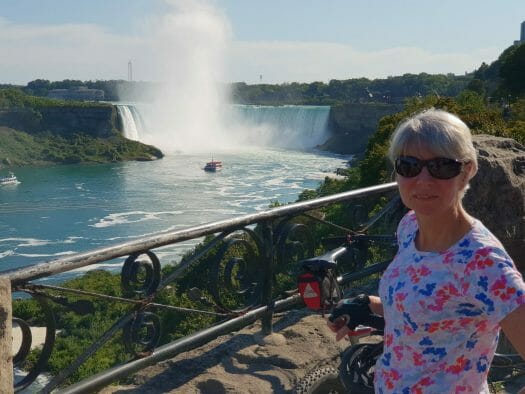 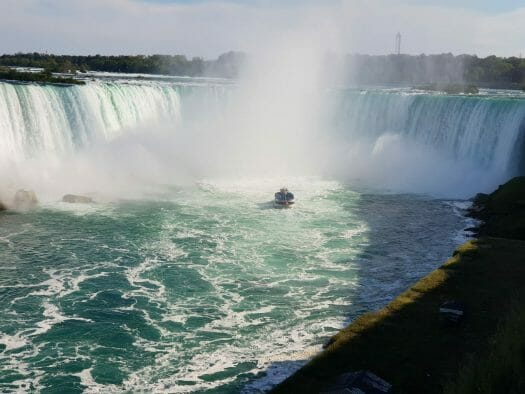 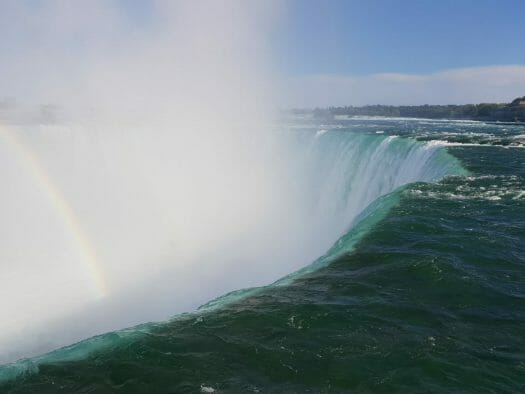 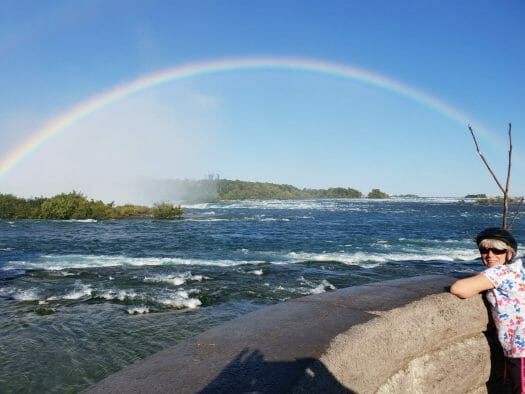 Nothing can take away from the beauty of Niagara Falls. I need to say that very clearly. However, I was quite shocked at the area we cycled through to reach the falls, this world-renowned area of outstanding natural beauty. It was an obscene clutter of amusement arcades, fairground rides, casinos and fast-food outlets. Nothing against any of these, but here? Really? 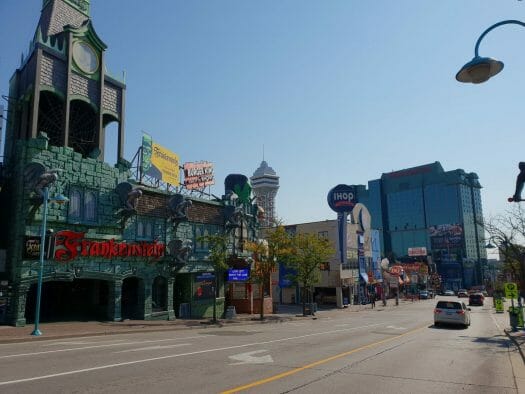 The road which follows the river away from the falls, Niagara Parkway, is lovely. We rode it on the motorbike, but a number of people were on pedal bikes (and electric scooters!).

There are various view points along here, including the Niagara whirlpool in the Niagara gorge, downstream from the falls. The water rushes in from one direction and is forced round and out in a direction which almost goes back on itself. The swirling water is quite a sight! 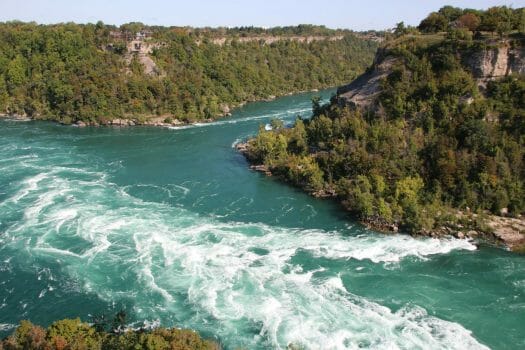 The road wends its way along to where the river finally spills out into Lake Ontario. 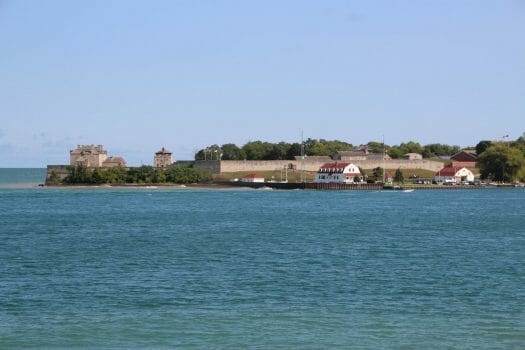 Fort Niagara (- that’s in USA by the way, seen from Canada) where the Niagara River spills into Lake Ontario.

Many of the houses and buildings along Niagara Parkway are quite beautiful and fairly soon we were in vineyard country. We visited the Peller Estates Winery, mainly because it has a link with the Gray Monk winery in Kelowna, one of our favourites, and also because they have recently collaborated with Glenfiddich (see On the Whisky Trail) to produce a special “Winter Storm” whisky, which was matured in their ice wine barrels. 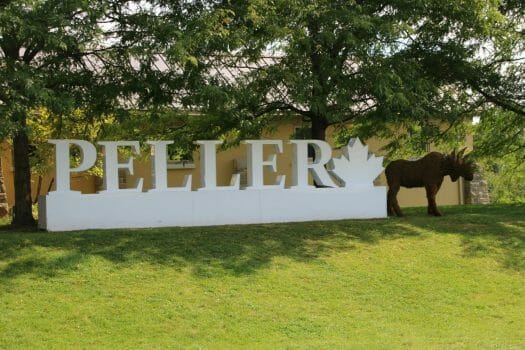 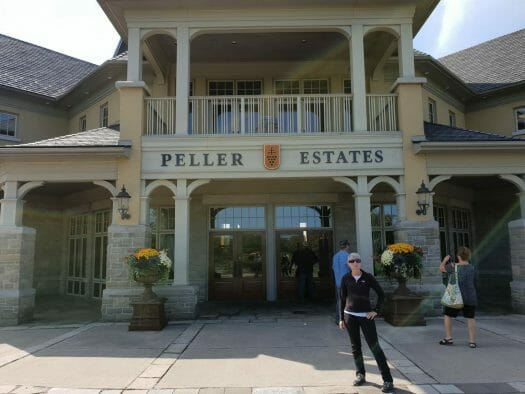 The estate is beautiful and the tour was informative. We went into the vineyards and the barrel warehouse and also into the ice wine bar. This is a bit of a marketing gimmick really. We had to don coats and go into an “ice cube” which is kept at -10c.  The bar is indeed made of ice and it was here we sampled the ice wine. Cute, but there is absolutely no need to keep ice wine at this temperature of course! 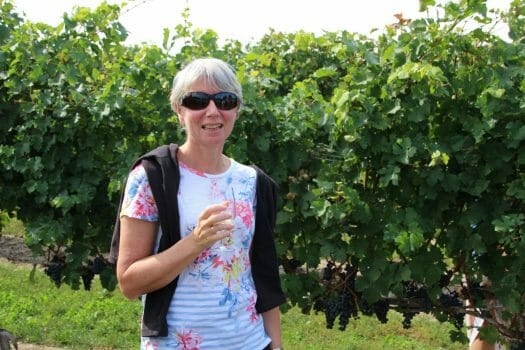 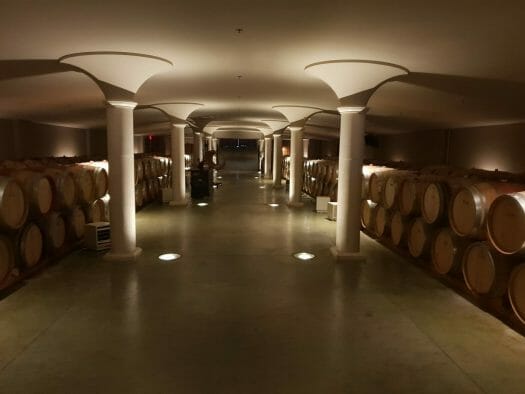 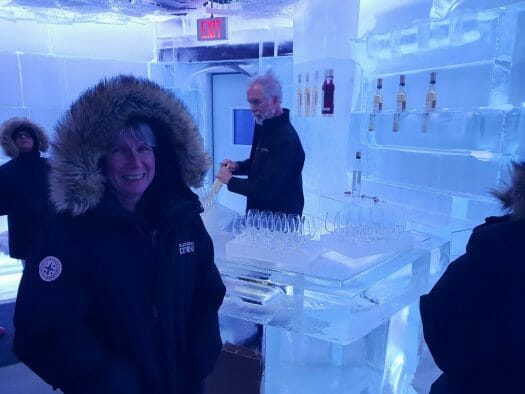 We also decided to have lunch in the restaurant here and opted for the tasting menu. I had the wine pairing, but Peter was in charge of the motorbike so he just had to watch! The restaurant is lovely and there is the choice of sitting out on the veranda or inside. The food was very good with some interesting combinations of flavours (eg. spicy sausage in ricotta cheese served with barbecued fruit). I would give it 8 out of 10 and this was sealed by our waitress, who was knowledgeable and helpful. When I said I was not keen on the wine pairing (a sweet dessert wine) with the cheese she explained the reasons behind it but then also brought me a much more suitable red! This is the kind of service which makes a difference in a good restaurant. 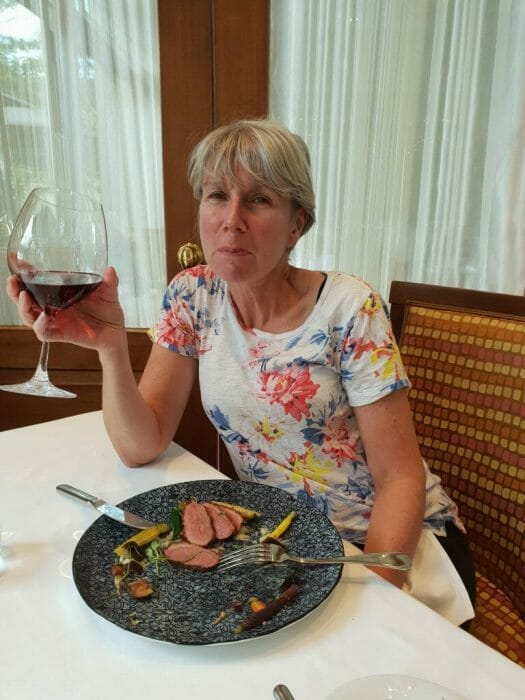 A great way to conclude this section of our trip! Over the border next – but that’s for another day!