Visiting The Henry Ford Museum of American Innovation in Detroit is an unforgettable experience. Really. I like cars, but Peter is passionate about them. I was happy to go along and spend a couple of hours admiring a few jalopies, but I was completely wowed by The Henry Ford, as it is commonly called.

Yes, it has cars and lots of them, but it has so much more. After five hours, we managed to leave, absolutely exhausted. I say “managed to leave” because once we decided that we had seen as much as we could for one day, it then took us well over an hour to actually make it to the exit as we kept seeing other exhibits that we simply had to check out. Even then, there were whole areas of this extensive facility (eg. the Greenfield Village, the factory tour) that we did not even approach. It would take several days to fully explore the whole of The Henry Ford Museum. We will go back and visit these areas on another occasion.

The Henry Ford Museum is located in Dearborn, a suburb of Detroit in Michigan. It is quite easy to find and there was plenty of parking available when we visited.

The Henry Ford Museum is a celebration of American innovation, but it also applauds European contributions as well. Inevitably, the museum traces the development of the motor car and there are some truly iconic cars on display. 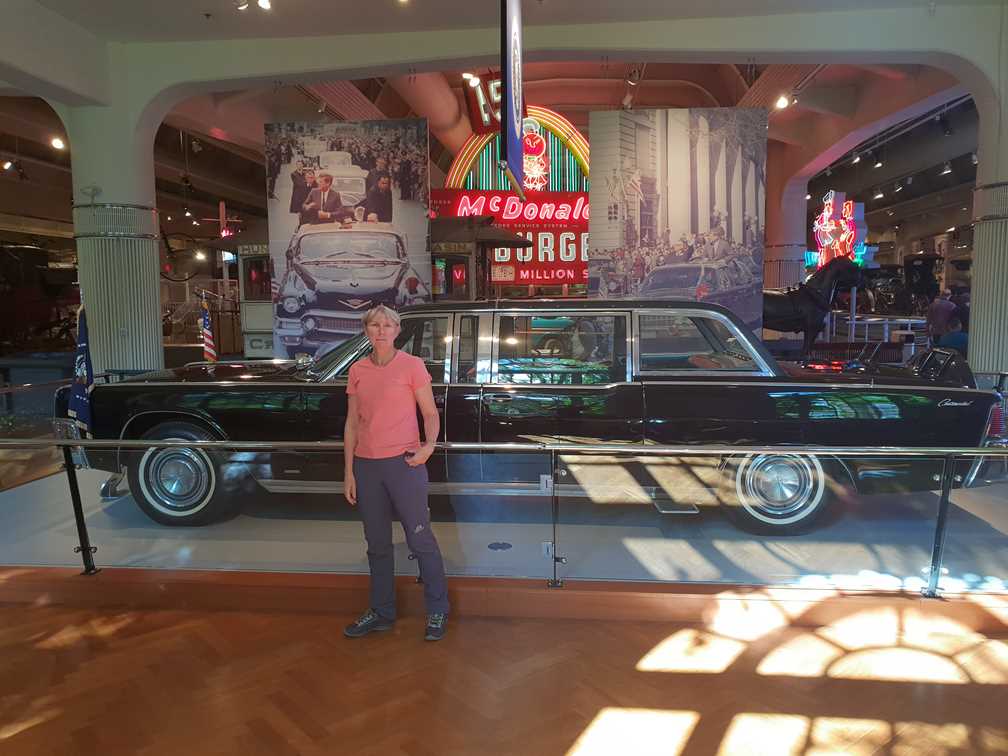 The car in which President John F. Kennedy was assassinated. It was later restored and used by Lyndon B. Johnson and Richard Nixon. 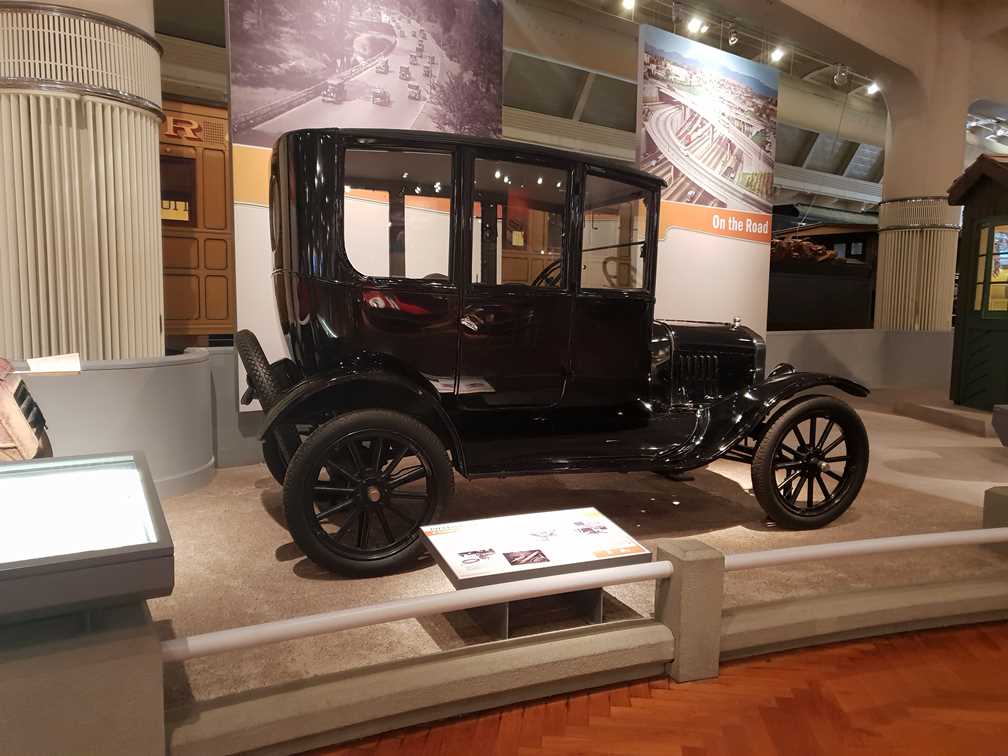 The “Model T”. The first car fabricated on a production line, it was affordable by the middle classes. 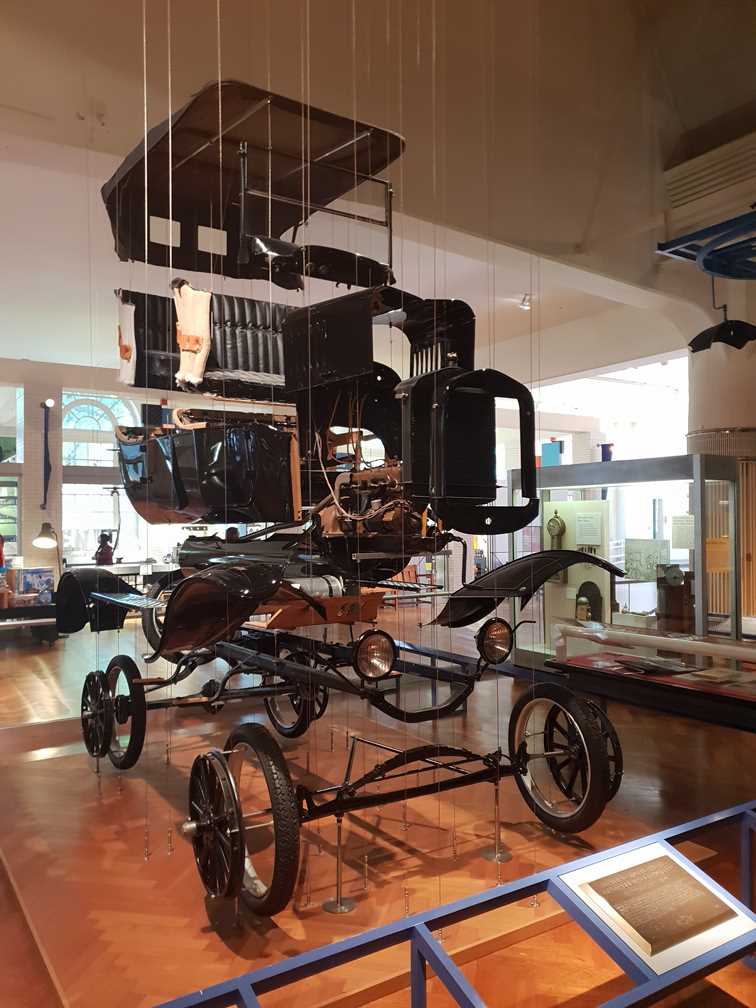 Exhibition: how to build a Model T. 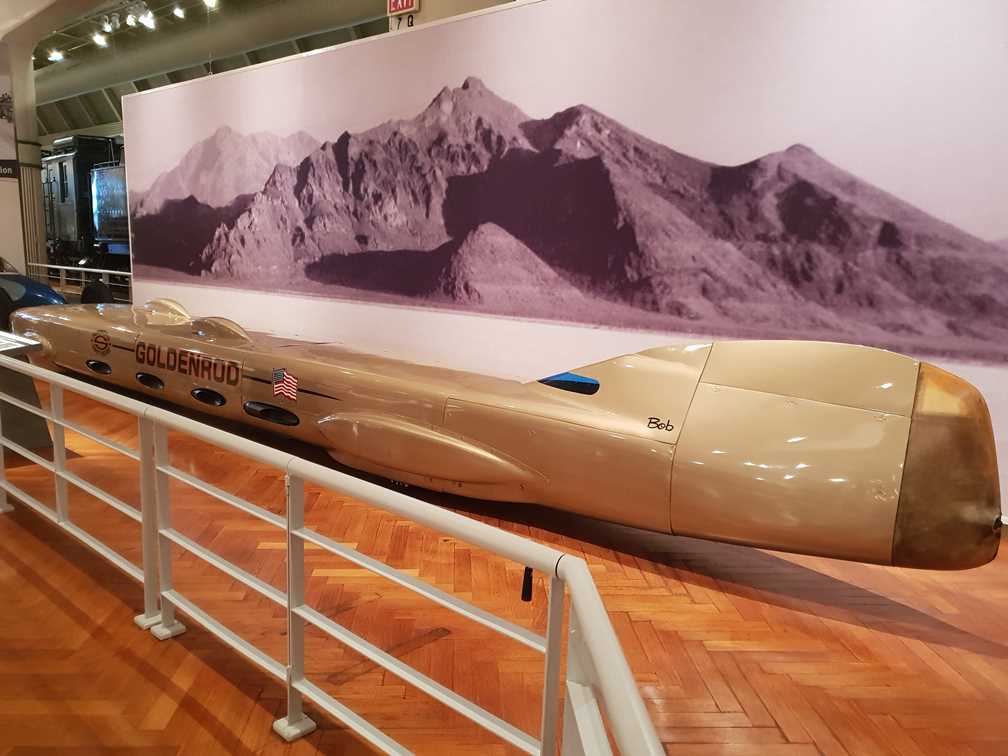 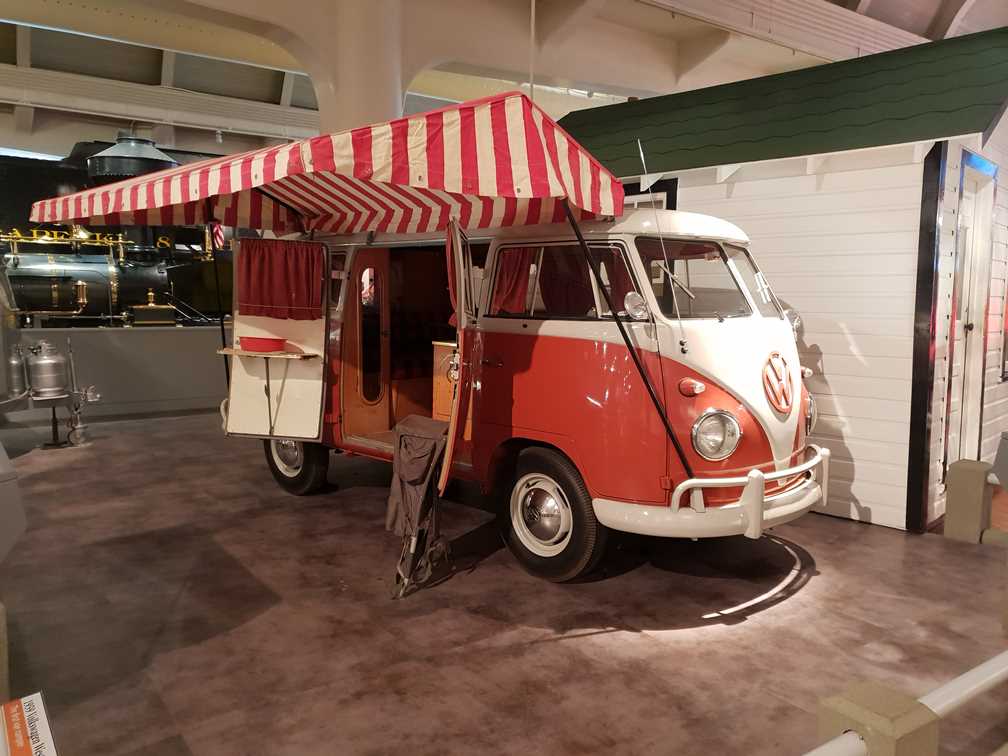 Classic VW Camper Van (well, we were touring in our camper van!) 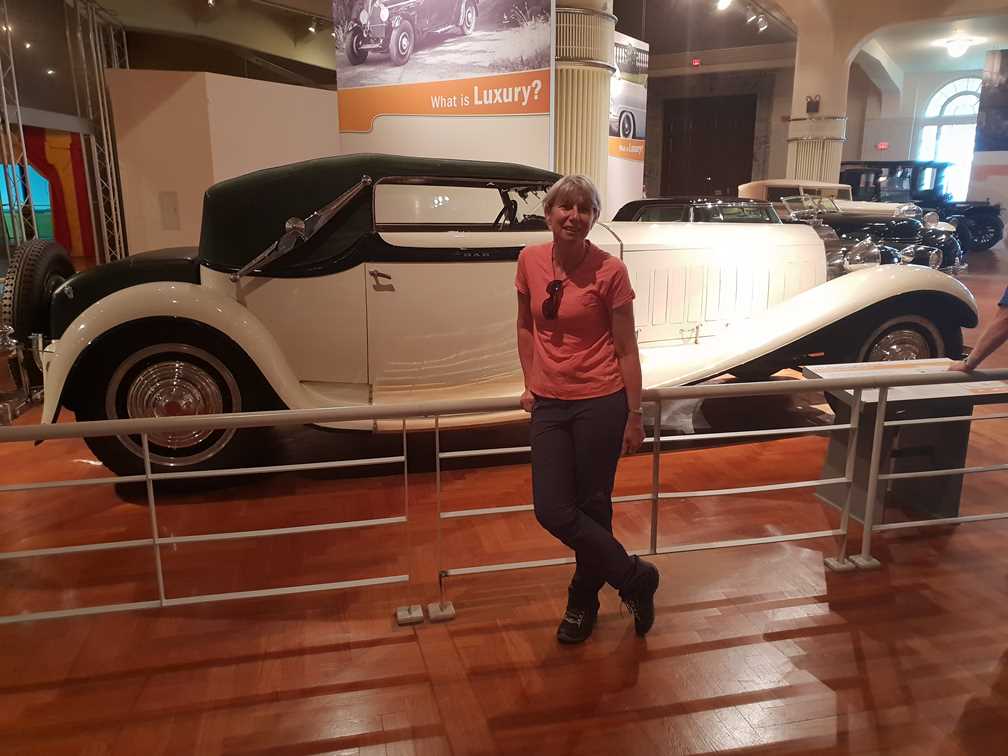 Bugatti Royale, a luxury car built for people with lots of money! Only seven were built.

The museum also demonstrates the development of the steam engine, trains and many other machines. 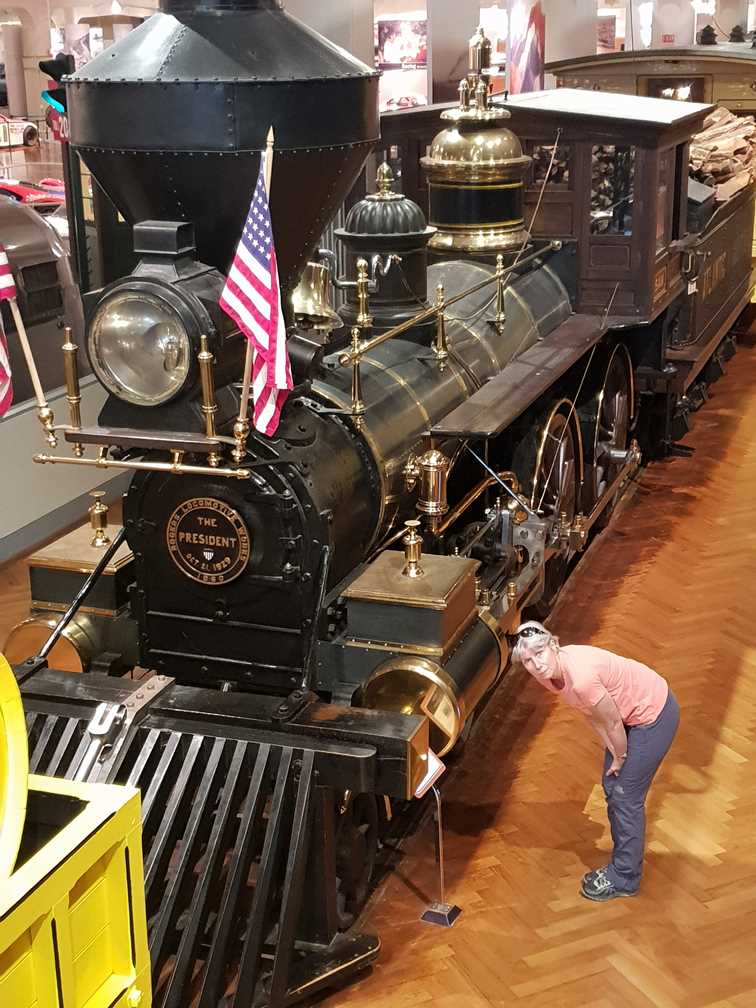 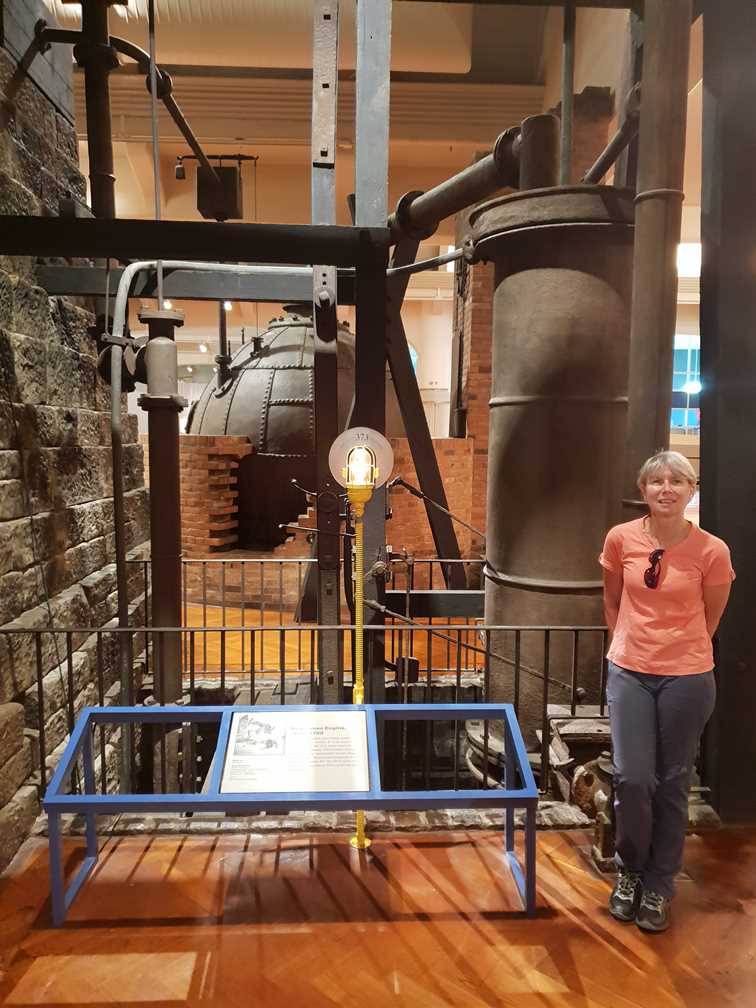 There is a large section featuring the development of the aeroplane. 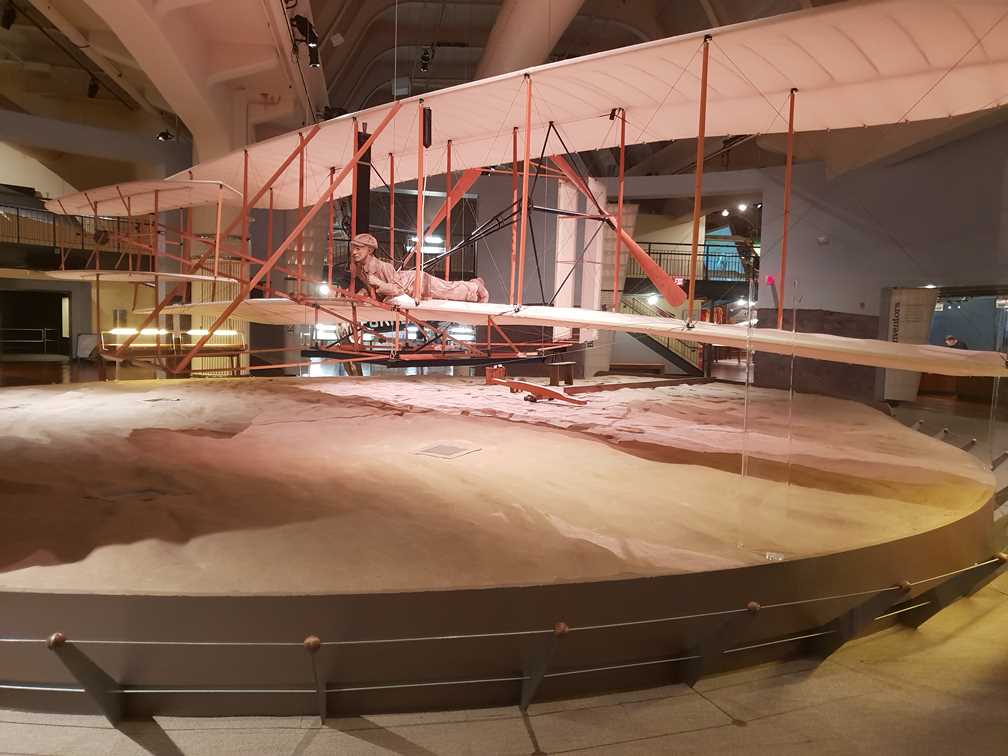 A full-size replica of The Wright Flyer which made the first powered flight in 1903. 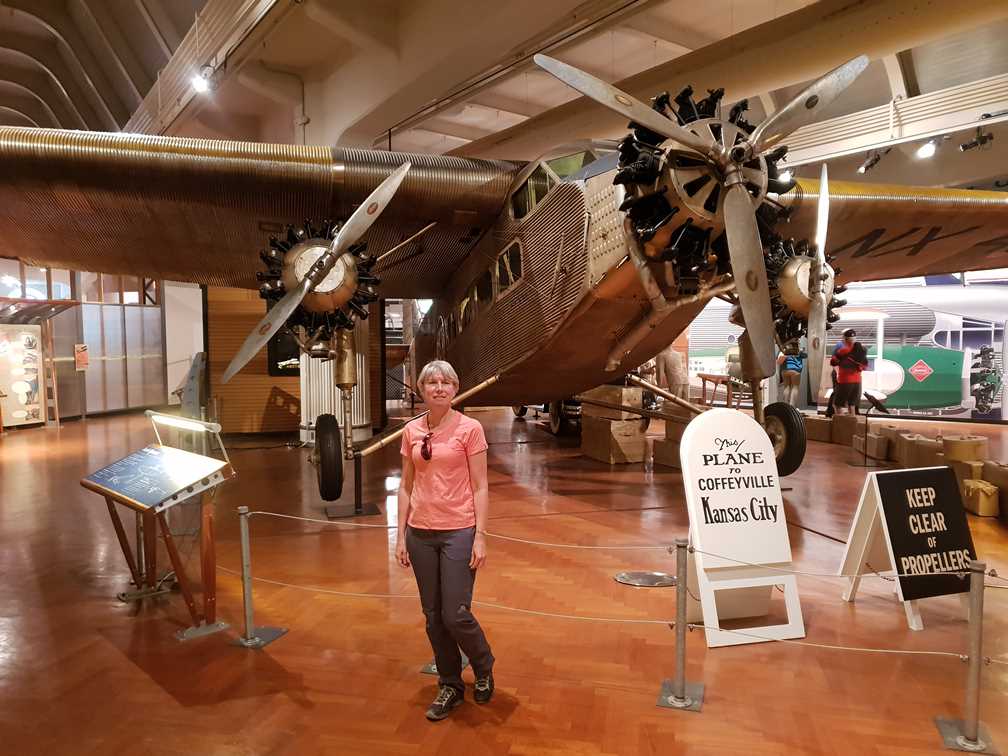 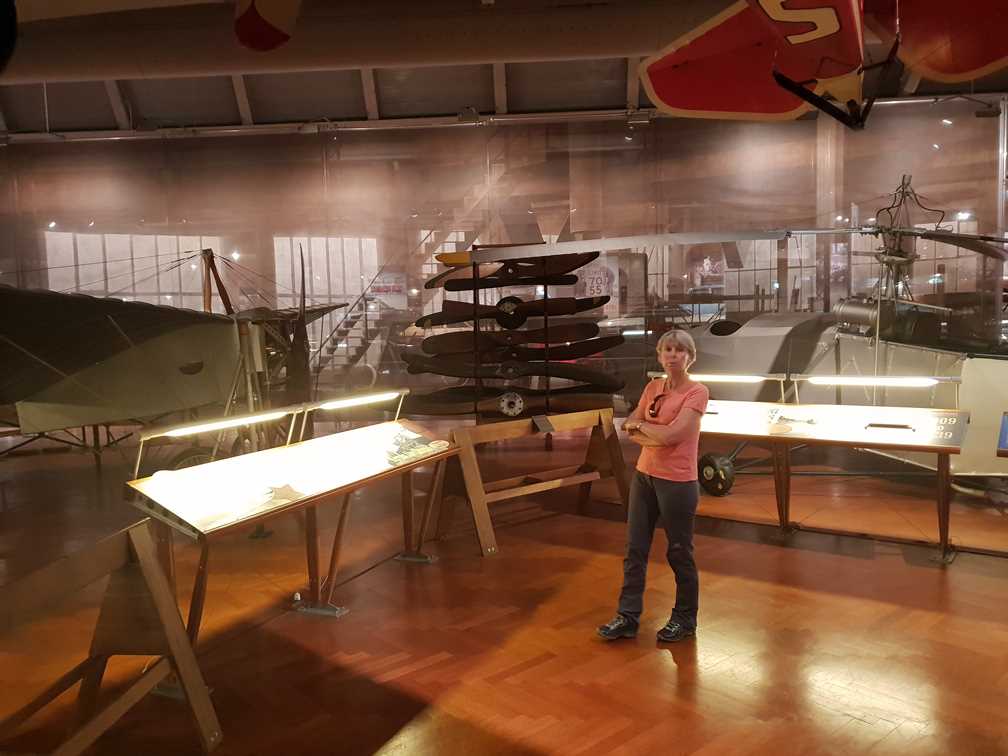 On the left, the plane in which Bleriot made the first cross channel flight. On the right Sikorsky’s helicopter, the first fully controllable machine on which future helicopters were based.

There are examples of engines and generators from every stage of their evolution. 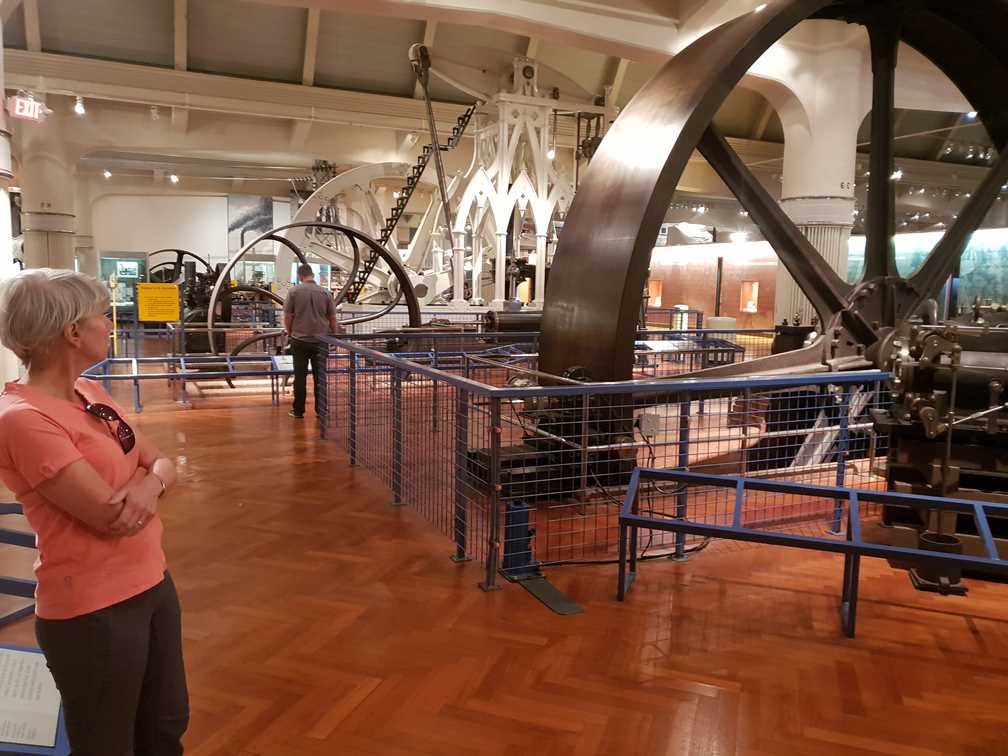 I love the personal stories behind the exhibits. I was unaware before visiting the museum that Henry Ford was close personal friends with Charles Lindbergh and Thomas Edison. Ford and  Edison went on camping trips together! Ford presented Lindbergh, also a keen camper, with this camping trailer which was well used. 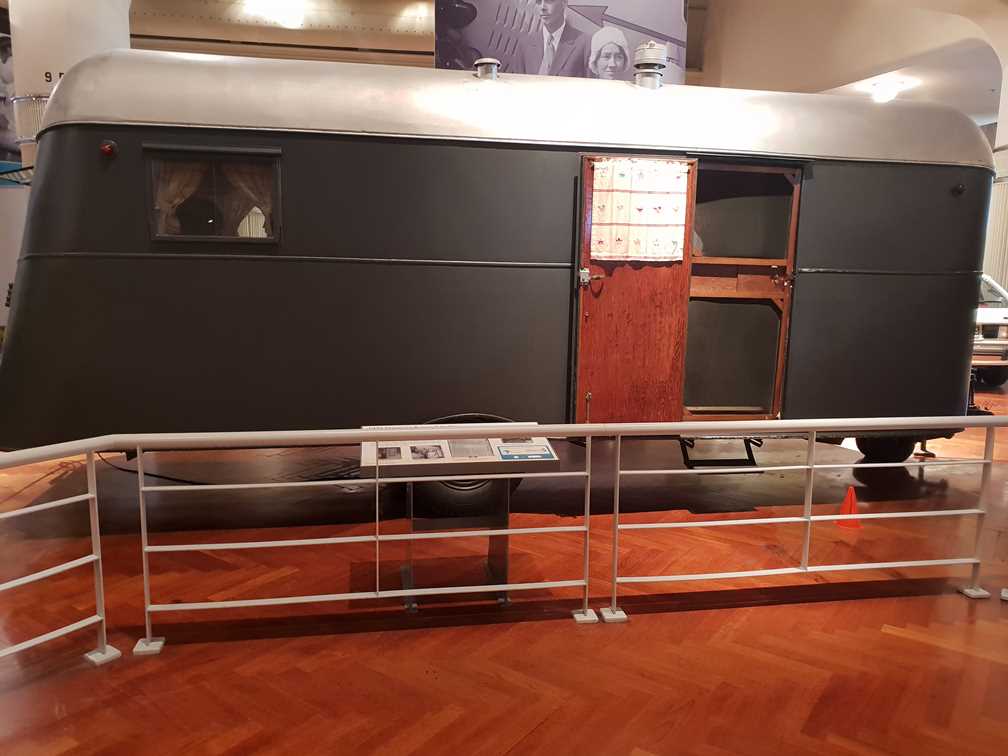 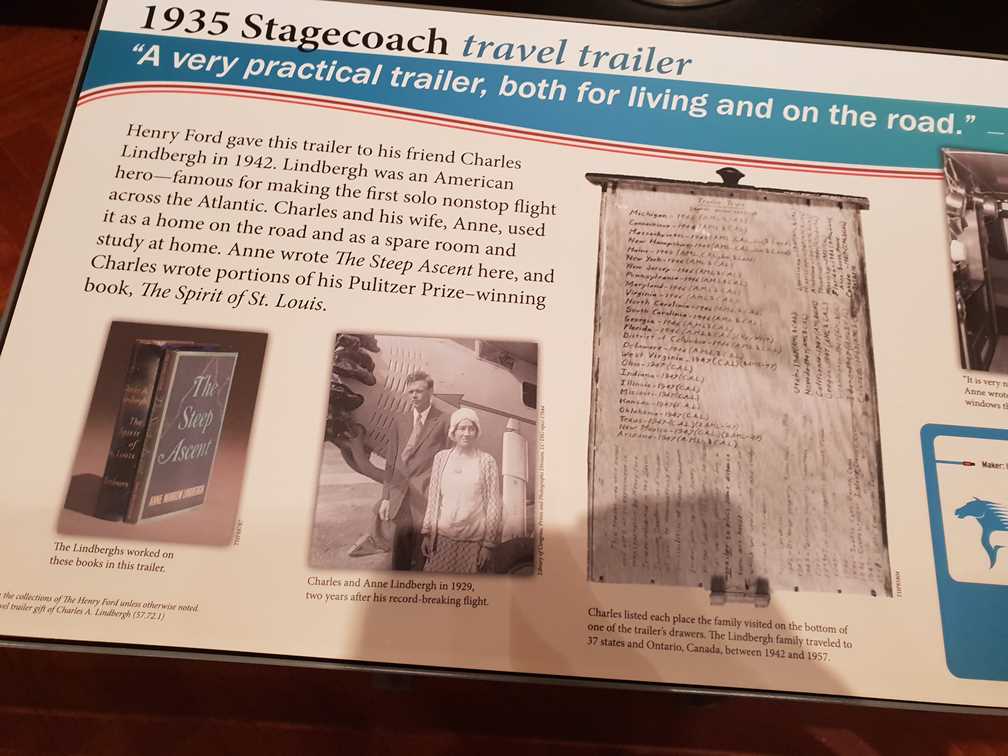 In return, Lindbergh took Ford for his first ever flight and also introduced him to the helicopter pioneer, Igor Sikorsky – whose original helicopter prototype was there in the museum, of course!)

Another “people story” is about Ford himself. Apparently, in his spare time he liked to fiddle! Who knew?  His collection included two Stradivari and an Amati, among others. 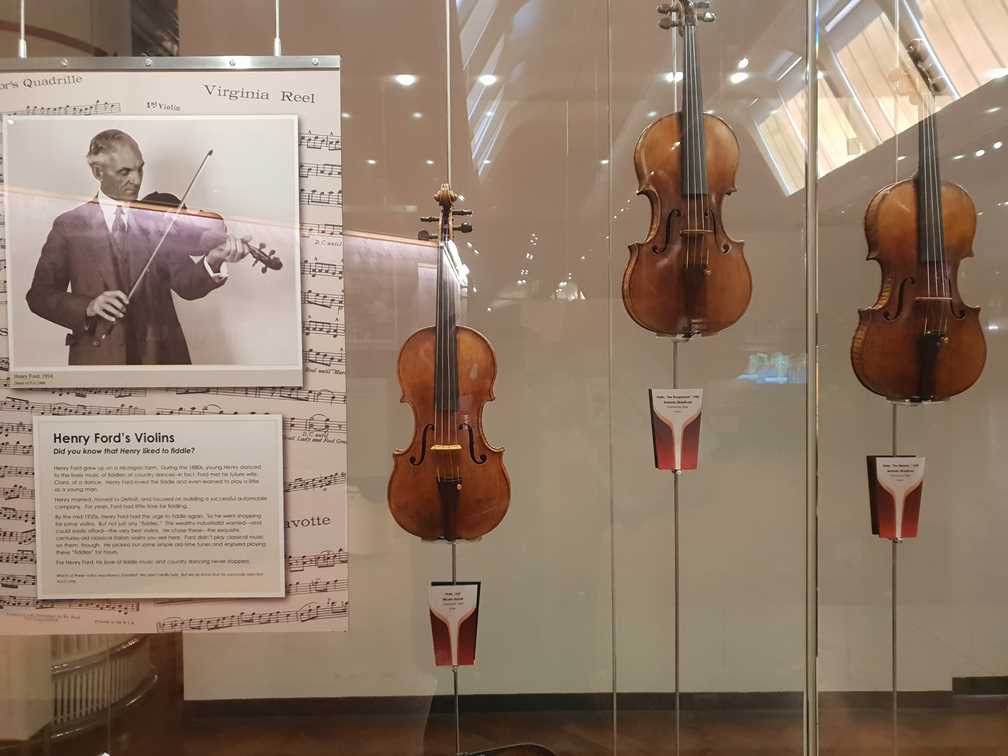 The Henry Ford Museum: in the home

There are displays of domestic innovations over the last couple of centuries, not just gadgets, although they are there. Design, furniture, architecture are all featured. 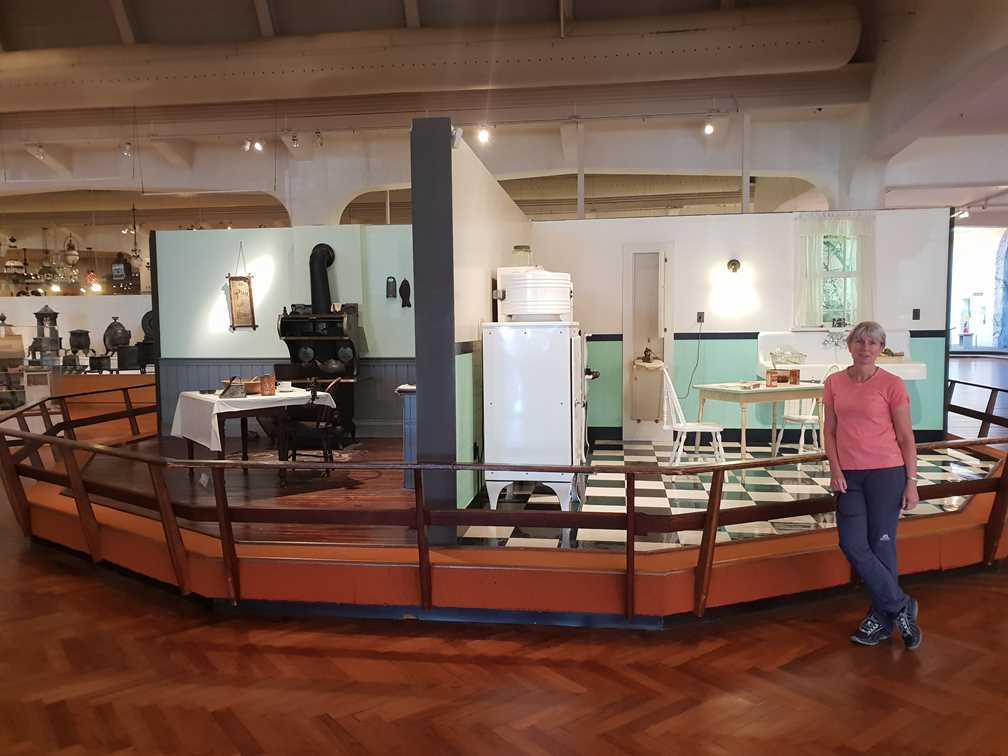 Another section of the museum is devoted to tracing the development of social history in America: the War of Independence and the Declaration of Independence; the Civil War which threatened the Union; the abolition of slavery; the emergence of equal rights for women; and the civil rights movement. 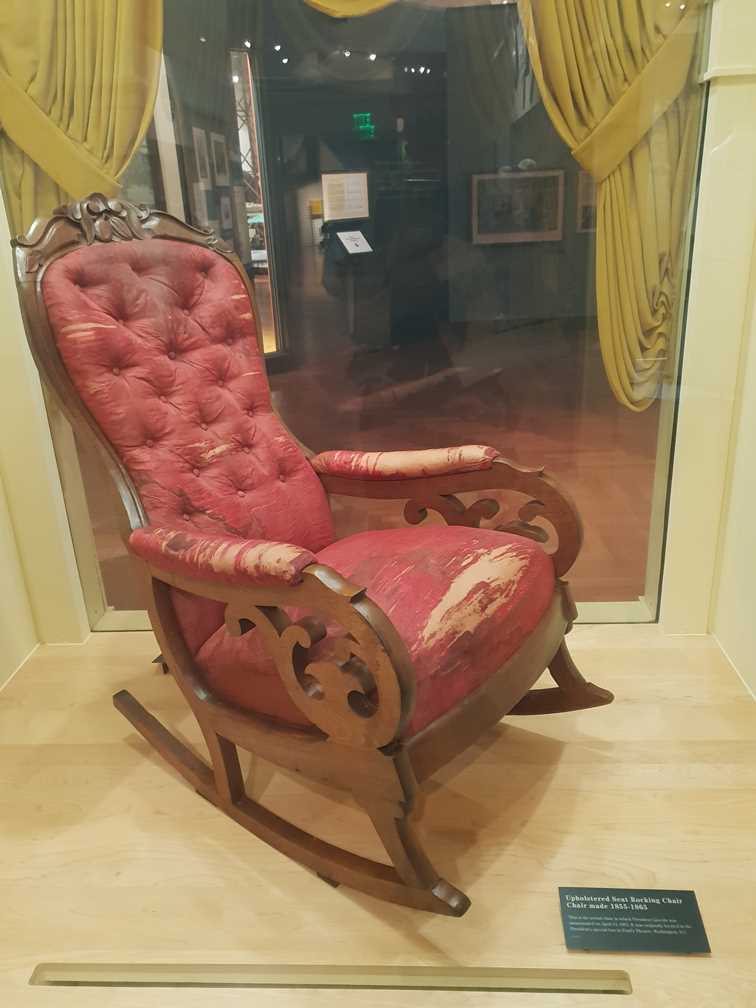 The chair in which President Abraham Lincoln was sitting when he was assassinated, shortly after he had delivered a speech which spelled the beginning of the end of slavery.

One of the most moving exhibits for me was this bus. 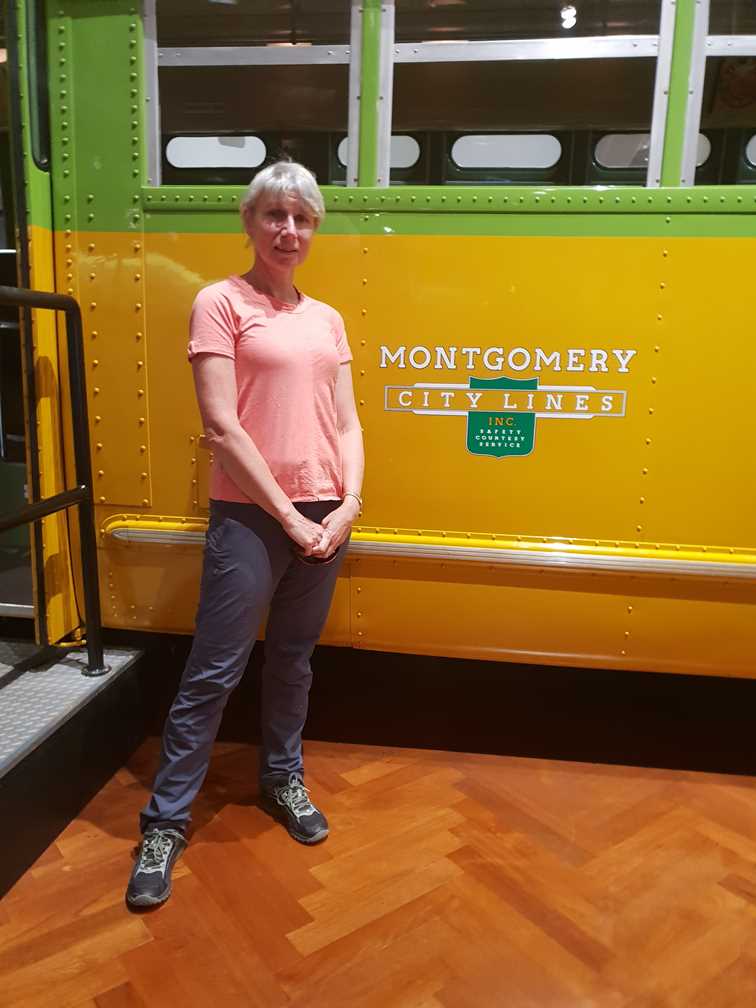 It is the very bus on which Rosa Parks said “no” and was subsequently arrested. This was the spark, which resulted in the boycott of the public buses and the civil rights movement led by Martin Luther King. A little over a year after she was arrested on this bus, the law was passed which said that Rosa Parks could sit anywhere she wanted on this bus.

The bus was bought by The Henry Ford Museum and restored. This is me sitting in the very seat where Rosa was arrested. 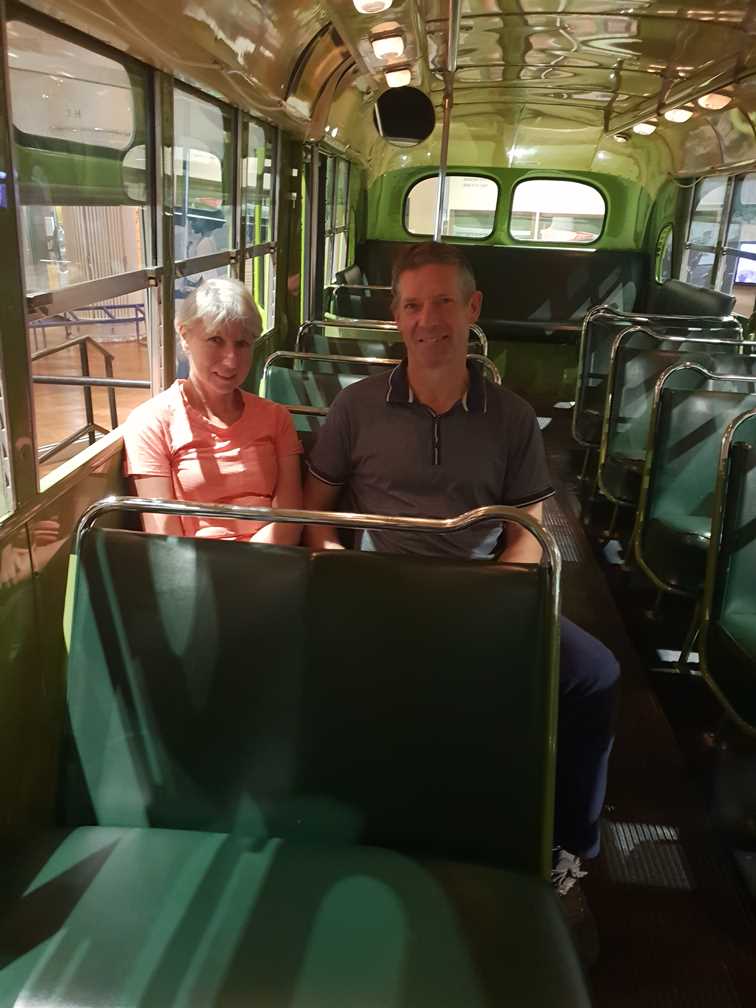 The museum was originally named for Thomas Edison: The Edison Institute. Edison was Henry Ford’s personal hero and great friend. Edison came along to help his friend celebrate the opening of  the museum in 1929. This is his signature in the concrete and his footsteps. 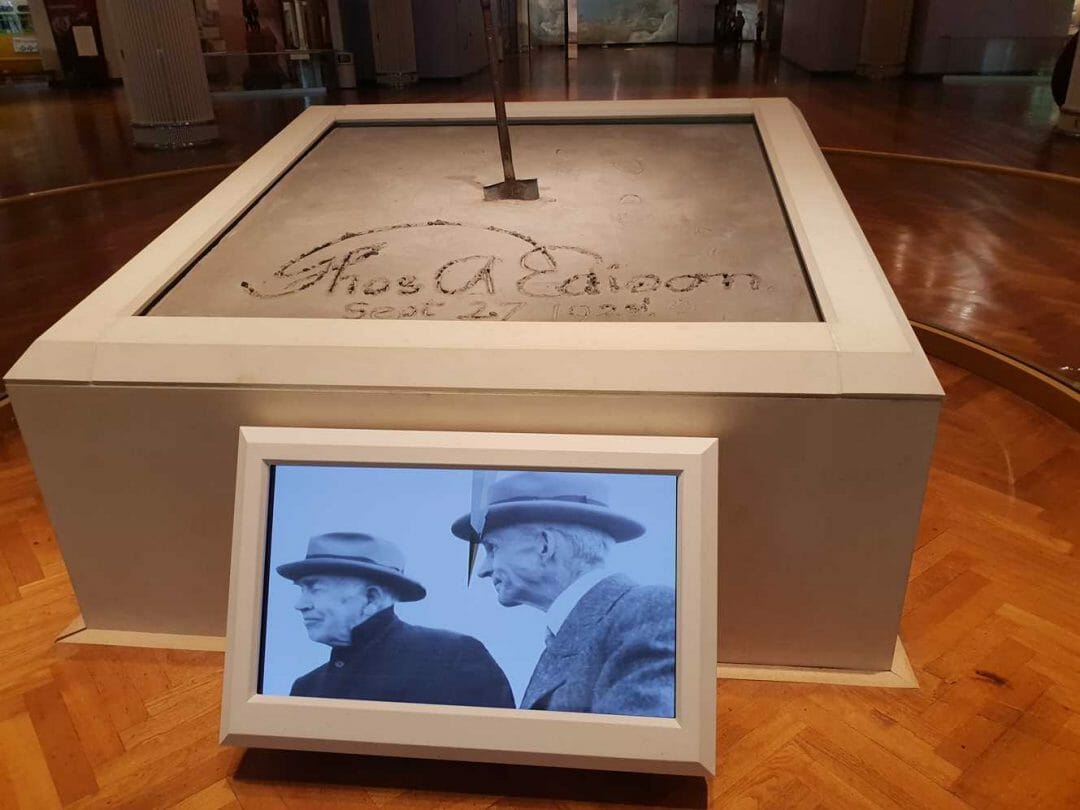 The accompanying video footage shows the marks being made.

Is it worth visiting The Henry Ford Museum of American Innovation?

Absolutely! We explored only a fraction of this The Henry Ford, but it was so incredibly interesting, we will be back to discover more. So much of what we saw is still familiar today. There was an Atari games consul on display; we had one. There was an Apple Classic; I used one ( – and not that long ago). There was a VW Beetle; we still see them. The aeroplanes in the museum look primitive in many respects, but it is easy to see how the modern aircraft evolved from them. History has moved especially quickly over the last hundred years and it was absolutely fascinating to see the developments in the exhibits.

If you enjoyed this post, Pin it for later! 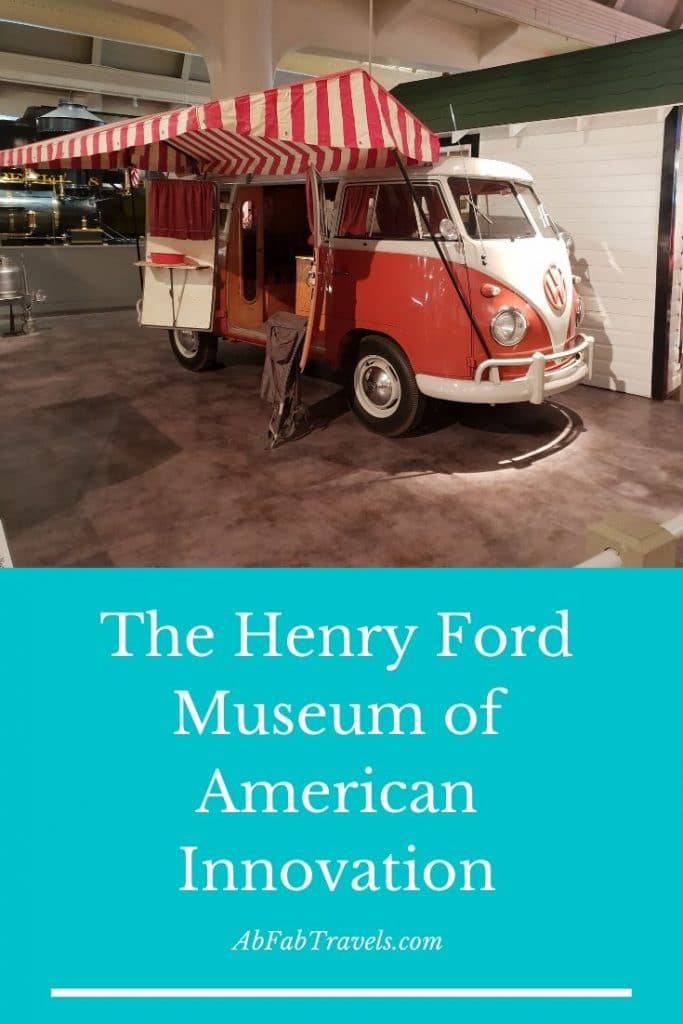 The Miracle of America Museum

Rusty, dusty and full to the brim, this quirky museum is an Aladdin’s cave of 20th Century memorabilia