Having wended our way down through England over several days, we arrived on the South Coast in glorious weather. Being Northerners, this is an area with which we are not familiar, but our aim was to explore this stretch of the Devonshire coast.

Our first port of call was a campsite close to the villages of Stokenham and Torcross, set between Dartmouth and Salcombe and this seemed to be a good starting point to explore both. We have the scooter (Scoot) with us which is great for these single track roads, and also our e-bikes (which are great for the mega hills!).

There is also easy access to the South West Coast Path and we spent one day walking this route from Start Point to East Prawle. This trail is very picturesque, taking walkers past some beautiful beaches with lovely views out to sea. 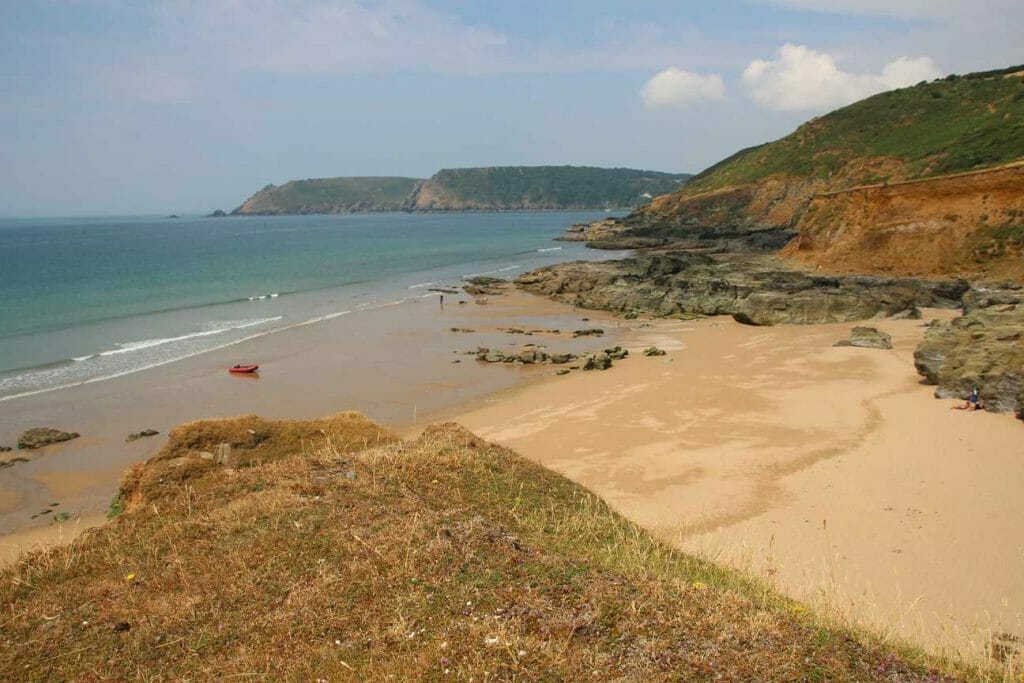 So many beautiful beaches along this route 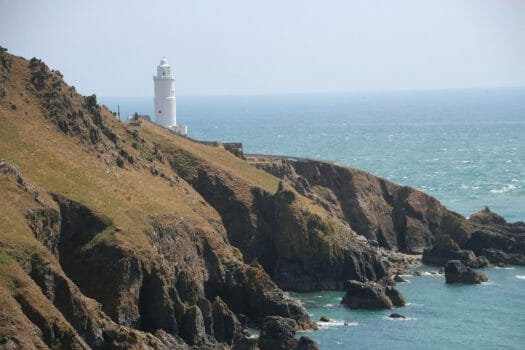 The light house at Start Point

For the most part it is a very straightforward hike, although there are a few places which are quite hard going underfoot and I would certainly not recommend flip-flops as footwear, which we saw with one group on the early part of the trail! 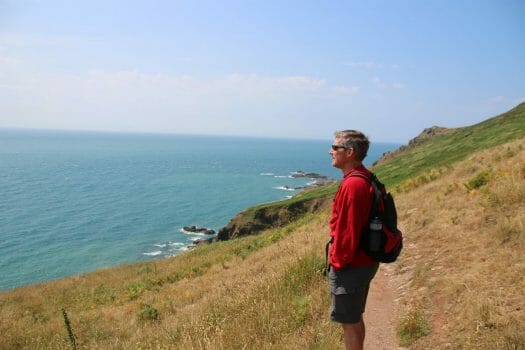 On the South West Coast Path 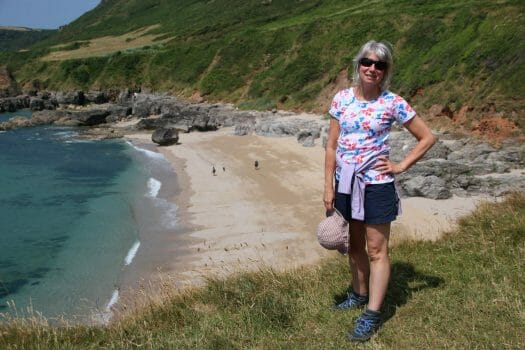 Some lovely beach views on this path

When we arrived at East Prawle, we called at the tea room for a cup of tea before heading back to where we had left the scoot at Start Point. We walked back over the fields on the bridleways, but you had to be really quite vigilant as it was easy to miss your way here and several of the paths were very overgrown. I think it might have been better to have simply done an out and back walk along the coast path rather than trying to make a loop. Still, we had a great walk and loved the views over the coast on the way out.

A few days later, we picked up the coast trail at East Portlemouth, or to be more precise, Mill Bay where there is a car park and access to the cliff top walk. This time we walked in the opposite direction, back towards East Prawle, although wanting an easier day (to facilitate doing the laundry, which was piling up!) we did not go the whole way and headed back on the high route from Gara Rock. At this point on the trail there is the option of taking the high road or the low road! On the way out we took the low road, quite close to the cliff edge and then on the return journey, we took the high route, slightly further inland but still with great views. Again, this was a lovely walk with stunning views over the Devonshire coast. 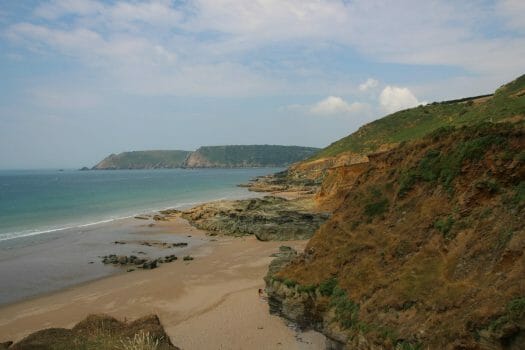 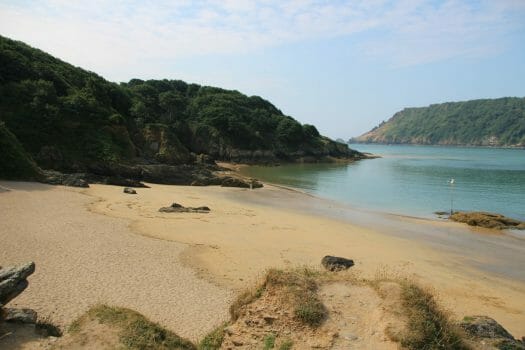 On another day we took the e-bikes and cycled out to one of the larger towns in Devonshire: Dartmouth. It is not a long way, only about eight or nine miles, but the hills are long and steep, especially the one going down into Dartmouth itself. Fine going down, but it would have been a struggle to cycle all the way up.

On the e-bikes (see I love my e-Bike) , this cycle ride was a joy, taking us through some pretty villages and by some lovely beaches. Blackpool Sands (yes, really!) in particular is very pretty. 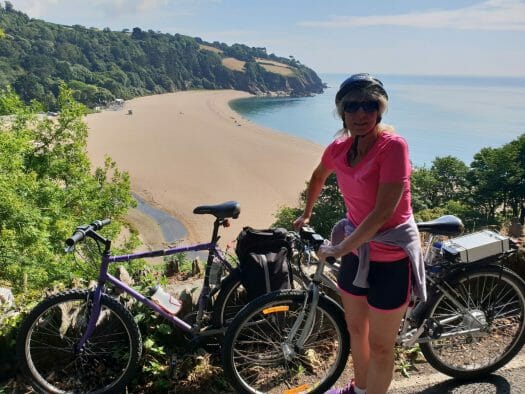 Looking down on to Blackpool Sands 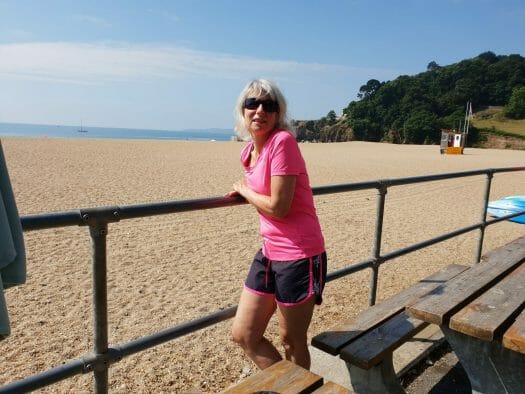 Dartmouth is characterful and we enjoyed wandering around, soaking up the holiday atmosphere. The views across the river to Kingswear are eyecatching and it is possible to take a ferry across the river to explore this area. We cycled down to Dartmouth Castle and had a look around the outside area, but it was too nice a day to go in. 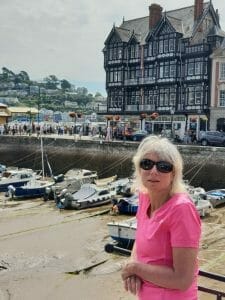 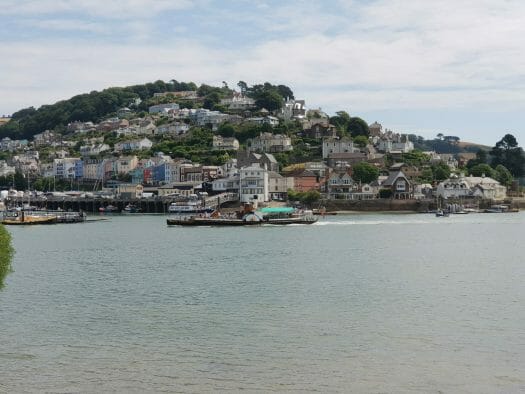 Looking across to Kingswear from Dartmouth

Another trip out was to Salcombe, which was rather further from our campsite so we took the scoot. Salcombe is smaller than Dartmouth and very pretty with narrow, winding streets through the small town which overlooks the bay. 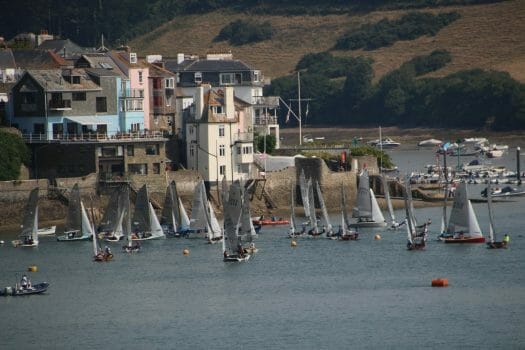 Looking back to Salcombe from East Portlemouth

True to form, we found the Salcombe gin distillery, which is quite swish. The gin is not bad either! 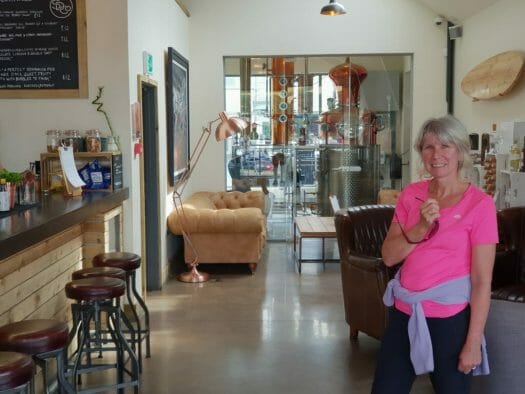 This area of Devonshire is very pretty with some lovely picturesque villages and houses. Thatched cottages are in abundance and traditional English pubs plentiful. 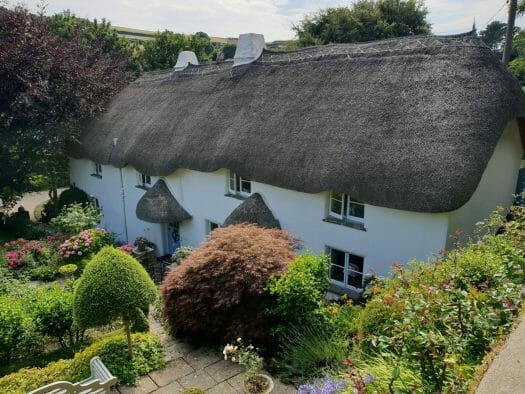 A word at this point about the roads in this area might be timely: many of them are very narrow…very, very narrow. It is therefore a mistake to follow sat nav if you are in a motor home. We know this to our cost and have the lasting reminder of a nasty gash down the side of Vinny where he made contact with a particularly stubborn branch. We got caught on some of these roads on our way to the campsite and I was literally breathing in to try to make us smaller. Once committed though, there was nothing we could do. Fortunately, we did not meet other vehicles – at this point. We did meet one when leaving a few days later. This was on a fairly main, two-lane road. A van coming in the opposite direction veered on to our side of the road to accommodate a sticky-out building (not uncommon around here) and his mirror made contact with ours, smashing it and leaving us without a mirror on the driver’s side. Shout out to this van man who did not even stop. Thank goodness for gaffa tape and eBay: a replacement is due to be delivered to our next campsite in two or three days.