Picture it: you are in a spaghetti tangle of flyovers on a multi-lane highway in a major North American city; it is blowing a blizzard; you are in a 28 foot long campervan; you are heading for the car rental section of the airport. Almost there. It is the last car rental outlet in the airport at the end of a long road. Then, without warning the road in front of you disappears into a multi-storey parking lot! The head room is 10 feet; the campervan is 11.5 feet high. Problem. There is no other way forward. Even if you could turn round, which you can’t, you would be facing the wrong way up a one-way road…. 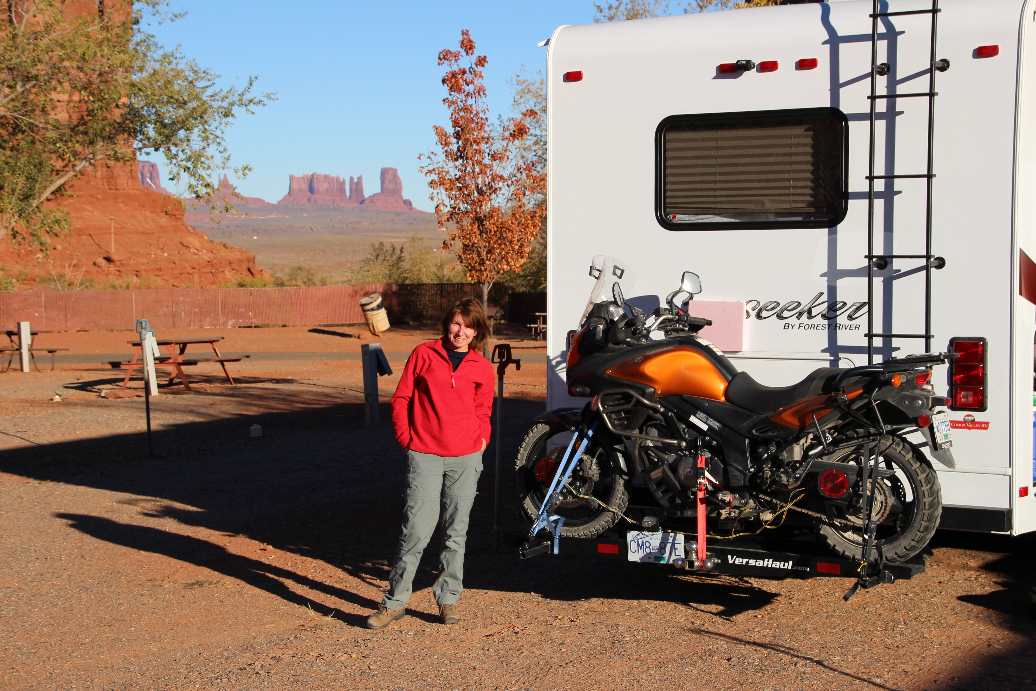 We bought the campervan whilst we were living in Canada nearly three years ago.  Since then we have covered almost 50,000 kilometres and it has been a fantastic way to explore North America. I would recommend it to anyone. By American standards, our campervan is small at 28 feet, but that is rather larger than most rigs that you would find in the UK. We also have a motorbike on a rack at the back which makes the actual length of the vehicle around 31 feet. The motorbike is great for exploring and getting into the nooks and crannies of places when we have parked up the camper. We have covered several thousand miles on the bike as well! 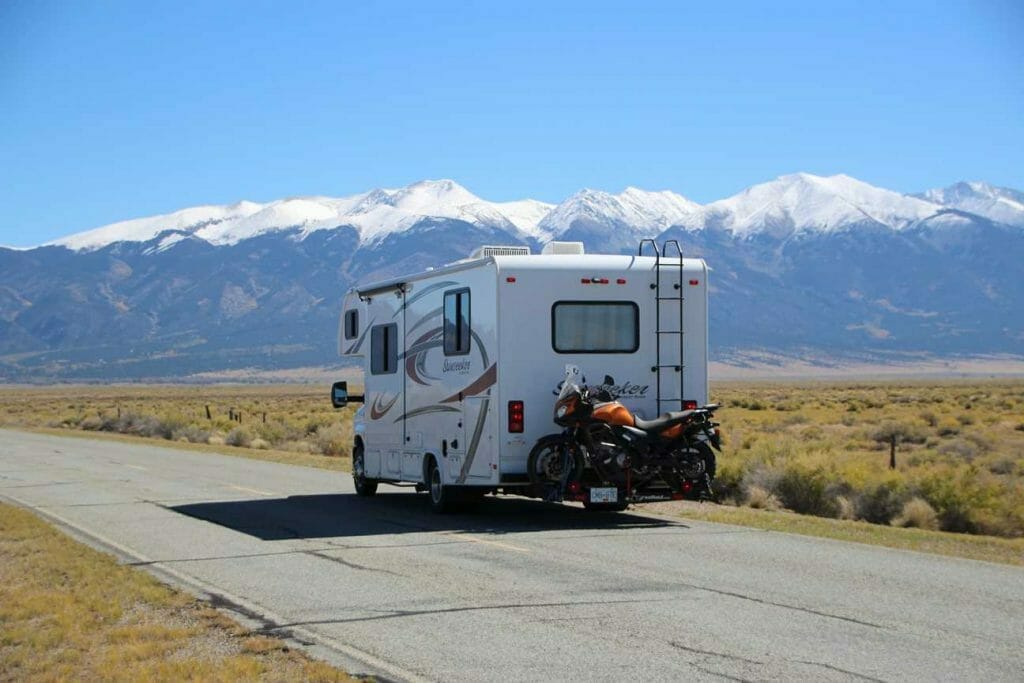 On the road to the Great Sand Dunes

Similarly, driving in large cities in the US or Canada does not really bother me, except that I need to put in a caveat here: “as long as I am in a normal-sized car”. I avoid driving the campervan in large cities like Vegas, San Fran or Dallas. I leave that to his nibs. Or I did until the Toronto incident. 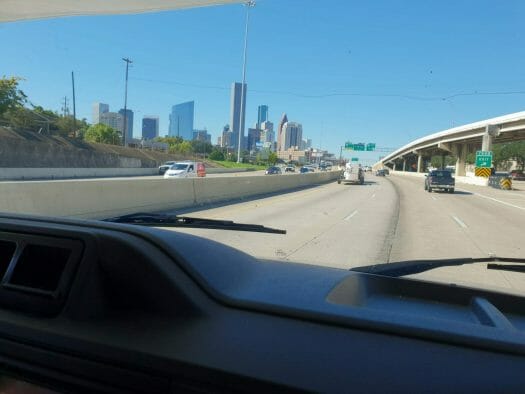 The camper is called Fat Vanny and there is a reason for this. It is fat – much fatter than campers you normally see on UK roads. The highways in North America are generally bigger though so that is okay, mostly. However, Fat Vanny is a large, unwieldy vehicle and driving through cities is not easy. The roads are busy (four, five or more lanes) and there are frequent lane changes to be managed only by side mirrors.  I have tended to avoid it. 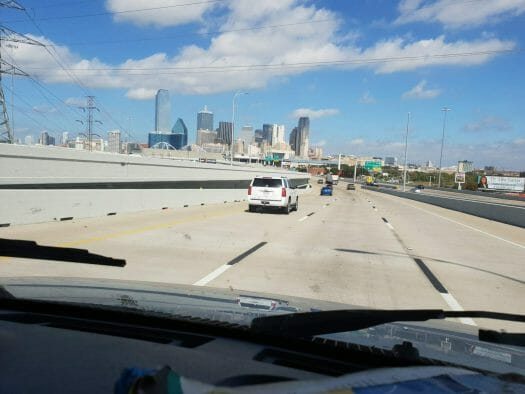 Austin in Texas. This picture does not do justice to how busy the roads were.

Peter does the lion’s share of the driving because he is good at it. I often take a turn though, not just to give him a break, but because I know the time will come (and it has on several occasions) when for whatever reason, I have to drive. I do not want to be nervous about this, so I drive to keep my hand in and I really quite enjoy this on normal roads and highways.

So how did the incident at the airport pan out?

Well, we were in Toronto and were going to fly back to the UK from there after a magic ski season in Colorado. We had booked storage for the camper somewhere in the wilds of Ontario and decided to hire a car to get to the airport.  (Car hire is quite cheap in North America.) We would put the camper into storage, drive to the airport and drop off the car. First though, we had to collect the car. That meant driving to Toronto in the camper. No bother: Peter would drive there and I would drive the normal-sized car back to the campsite. The booking was in his name, but we could switch that once when we collected it.

Except we were then faced with the problem of the road disappearing into a multi-storey carpark. There was no alternative: we had to reverse the van all the way back to where the road had come to a fork so that we could take the other road in a forwards direction. I should perhaps clarify here: Peter had to reverse all the way back to the fork in the road! Fortunately it was a two lane road so oncoming traffic could get by.

Then it was a quick seat change (there wasn’t really anywhere to stop), he nipped out to run and collect the car and I was left to drive back through the airport and the spaghetti tangle on to one of the busiest routes out of Toronto. In the 31 foot campervan.

I negotiated all the lane changes and got on to the correct route. Mrs Sat Nav was sort of helpful until we encountered major road works and then she got her knickers in a twist, “re-calculating” and asking me to “return to the designated route”. I think she thought I was driving across a field and I swear, the pitch of her voice was getting higher with every instruction to return to the highway. Eventually, she gave up.

Unfortunately, she sprang into life again to tell me to leave the highway. This was a couple of junctions before I had expected to exit, but she knew the area better than I did and perhaps she knew a quicker route. She didn’t. I think she was just exacting revenge because I had ignored her before. She took me through a town and in completely the wrong direction. I pulled into a car park and reprogrammed the Sat Nav again, but to no avail. (I should point out that this is the Sat Nav which came with the camper and it is a bit out of date; cell phone versions are better, but I did not have data on my phone.)  I knew we were quite close to the campsite where I was headed, but I was not sure of the way. I decided to text Peter to let him know I was okay before seeking out directions. He had just pulled off the highway so decided to come and rescue me. (I’ll just point out at this stage that I did not need rescuing; I would have sorted it. But anyway).

He eventually pulled into my carpark (with his cell phone Sat Nav that was still on friendly terms) and instructed me to follow him. Except he pulled out before I had the chance to check out the rental car and when I had to wait for oncoming traffic, I lost sight of him. I realised, as I followed the grey Japanese car, that I might be stalking a complete stranger. But it was a good bet I was right. Most rentals are grey and Japanese. I lost one in a carpark in San Jose a couple of years ago. Rental cars really should be bright yellow with a couple of distinguishing features, I think. Anyway, I was correct. He was driving the grey Japanese car.

Driving in North America is relatively straightforward, but if you have not driven there before, there are a few things I would point out:

Obviously, it is very important to check the exact rules for each state and province when driving in North America. This list is by no means definitive or “official” and is compiled from personal experience simply to raise awareness that it is different driving in North America. If any of my American or Canadian readers have any additions or suggestions, please add them in the comments. 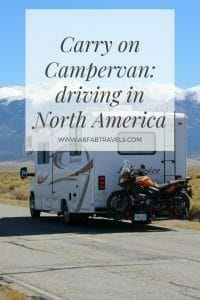